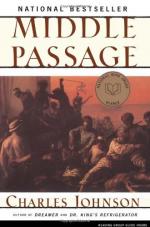 Charles Johnson
This Study Guide consists of approximately 60 pages of chapter summaries, quotes, character analysis, themes, and more - everything you need to sharpen your knowledge of Middle Passage.

This detailed literature summary also contains Topics for Discussion and a Free Quiz on Middle Passage by Charles Johnson.

Rutherford Calhoun arrives in New Orleans as a newly freed slave who enjoys drinking and the company of exotic women. His soul craves adventure and new experiences He soon meets Isadora, a naïve schoolteacher with a fondness for all living things. Although their personalities are almost polar opposites, Rutherford finds himself drawn to her unconventional attractiveness and proper ways. Isadora soon grows tired of Rutherford's wild habits however, and brings up the subject of marriage, telling him all he needs is a woman like her to bring him down to earth. Rutherford tells Isadora he will never get married; that his soul yearns for excitement and adventure, not marriage.

Isadora is hurt by this response but is still determined to make a man out of Rutherford, so she goes to Philippe "Papa" Zeringue, a wealthy business owner and local gangster to whom Rutherford owes a great deal of money. She makes a deal with the man that she will use her savings to repay his debts if Rutherford agrees to marry her at noon the next day. When Rutherford learns of their deal, he is horrified at the prospect and goes on a drinking binge at the closest bar. At the bar, he meets Squibb, a fellow alcoholic who plans to begin work the following day in the kitchen aboard the Republic. When Squibb passes out in a drunken coma on the table, Rutherford steals his papers and sneaks aboard the ship. He is soon exposed as a stowaway, since Squibb managed to make it on board, but Rutherford is allowed to remain.

The ship's captain, Ebeneezer Falcon, maintains a well-known reputation for being callous and cruel but takes a liking to Rutherford and confides in him. The ship reaches the coast of Africa where they load up their intended cargo, including 40 Allmuseri tribespeople as slaves who are treated cruelly by the captain and crew. Just as some of the crewmembers were preparing a mutiny against Captain Falcon, the slaves themselves revolt and take control of the ship. Squibb and Rutherford become the only surviving members of the original crew. Conditions worsen; the ship quickly run out of food and water and diseases run rampant. Rutherford becomes very ill and is in a terrible state when he is notified of a commotion on deck during a terrible storm. The ship is in severe disrepair and gives way during the storm, spilling the remaining crewmembers into the ocean.

Rutherford is rescued by the crew of a nearby ship, along with Squibb and a few Allmuseri children. Rutherford soon realizes Isadora is also aboard the new ship and that one of the ship's owners is Papa Zeringue. Zeringue has proposed to Isadora and intends to marry her, but Rutherford intervenes by blackmailing him just as Zeringue had done to Rutherford a few months prior. Rutherford returns to Isadora a changed man and they remain happily together.

More summaries and resources for teaching or studying Middle Passage.