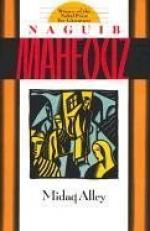 Naguib Mahfouz
This Study Guide consists of approximately 69 pages of chapter summaries, quotes, character analysis, themes, and more - everything you need to sharpen your knowledge of Midaq Alley.

This detailed literature summary also contains Topics for Discussion and a Free Quiz on Midaq Alley by Naguib Mahfouz.

Midaq Alley is a novel about a street full of colorful Egyptians coping with life towards the end of World War II. They include a dissolute café owner, his fiery wife, and their materialistic prodigal son; a young man who, for the love of a beautiful girl, goes off to make his fortune while she falls first for a rich, elderly sexaholic and later for a pimp who turns her into a prostitute; a kindhearted mystic; two ghouls; and assorted lesser characters. Gossip keeps Midaq Alley alive.

Midaq Alley is an isolated, dead end street in Cairo, Egypt. Uncle Kamil usually naps outside his confectionary, next door to his best friend Abbas's barbershop. A bakery, Salim Alwan's warehouse, and Kirsha's Café complete the alley's businesses. The café is where self-trained Dr. Booshy, kindly mystic Radwan Hussainy, and a somnambulant philosopher, Sheikh Darwish, gather nightly to smoke, drink tea, and talk. Two three-story residences close off the alley. Widowed Saniya Afify owns one, occupying the top floor and renting the others to matchmaker Umm Hamida and her beautiful foster daughter and to Booshy. Hussainy lives next door with his wife and rents one flat to Kamil and Abbas and another to the Kirshas.

Kirsha is addicted to hashish and occasionally obsessed by homosexuality. His spoiled son Hussain cares only about dodging gossip and escaping, while fiery Mrs. Kirsha (Umm Hussain) declares his actions sinful and seeks to reform him. The bakers rent a back room to filthy, sadistic Zaita, who cripples people so they will be more sympathetic as street beggars. Booshy solicits business. Rich, middle-aged Alwan is a workaholic and sexaholic, considering polygamy, while his children want him to retire and take care of himself.

Abbas loves Hamida but must go to Tell el-Kebir to earn his fortune with the British Army before the fiery tempered, materialistic girl overcomes a lack of affection and agrees to marry. Abbas leaves, believing the betrothal is binding. In his wake, Hussain Kirsha also departs, after causing a fight between his parents. Abbas is heartbroken to leave Midaq Alley but determined to do his best for Hamida, while Hussain is the angry prodigal son.

Umm Hamida concludes a marriage agreement between Afify and a younger civil servant and is then astonished to hear Alwan wants to marry her foster daughter. Hamida forgets her fiancé instantly as she pictures getting everything she wants in life. Fate steps in, however, as Alwan barely survives a heart attack and changes mentally. Cut loose from an anticipated life with Abbas, Hamida cares as little about Hussainy's advice as does lecherous Kirsha, whose wife drags the holy man into their squabble. Hussainy leaves on Hajj. Booshy and Zaita are arrested for desecrating tombs by stealing gold teeth, which Booshy sells cheaply to patients like Afify.

A political campaign comes to the district and Kirsha offers his vote to the highest bidder. A mystery man at the rally shows interest in Hamida, and during one of her daily walks, they talk and she accepts that she is on this earth to be taken—by Ibrahim Faraj. She leaves Midaq Alley without compunction, just as Hussain Kirsha limps back bitterly, laid-off, and married. Faraj turns Hamida into a profitable prostitute, renamed Titi. When he returns on holiday, intending to marry, Abbas learns his fiancée has vanished. Seeing Titi riding in a carriage, he chases her down, cannot believe what has happened to his Hamida, and vows to kill her pimp. Later, while walking with big-talking Hussain, Abbas sees Titi entertaining British troops; he snaps, attacks, and is pummeled to death. Hussain brings the sorrowful news to Midaq Alley, which talks about it for a while, and then returns to its everyday routine.

More summaries and resources for teaching or studying Midaq Alley.