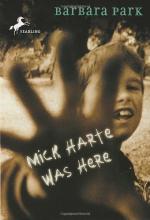 This detailed literature summary also contains Topics for Discussion and a Free Quiz on Mick Harte Was Here by Barbara Park.

The novel Mick Harte was Here by Barbara Park tells the story of a family that must come to terms with the death of one of its members in a bicycle accident. The story is told from the viewpoint of Mick Harte's sister, Phoebe. Phoebe tells the story of the aftermath of Mick's death in a way that is both sarcastically humorous and heart wrenching. At the conclusion of the novel, Phoebe uses a stick to carve into a fresh concrete sidewalk at her school the words "MICK HARTE WAS HERE." These words are Phoebe's lasting tribute to her beloved brother.

Phoebe begins her story by telling her readers that her brother is dead. She does not want to present a story in which the reader will get to like her brother, then learn at the end that he has died. Phoebe includes in her record the events of the day of Mick's accident. The siblings had a fight that morning and never reconciled their disagreement. Phoebe is in soccer practice when she hears the ambulance sirens coming to the school. When her coach tells her that the person for whom the ambulance was coming was Mick, Phoebe realizes she somehow already knows this.

Through the remainder of the novel, Phoebe outlines the journey of grieving that her family must travel after the death of Mick. The family experiences depression, separation, anger and then finally reconciliation and the beginnings of healing. It seems as if the family turns a corner when they attend Mick's memorial service together. Instead of being depressing, this service is full of laughter and funny tales about Mick's antics.

Perhaps the greatest thing that Phoebe does in her brother's honor is to participate in a bicycle safety assembly. At this assembly, Phoebe makes a dramatic statement about the dangers of not wearing a bicycle helmet. The reader learns at the end of the novel that if Mick had been wearing a helmet at the time of his accident, it probably would have saved his life.