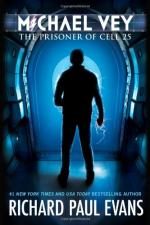 Richard Paul Evans
This Study Guide consists of approximately 33 pages of chapter summaries, quotes, character analysis, themes, and more - everything you need to sharpen your knowledge of Michael Vey.

This detailed literature summary also contains Topics for Discussion and a Free Quiz on Michael Vey: The Prisoner of Cell 25 by Richard Paul Evans.

Michael Vey is about to celebrate his fifteenth birthday. He lives in Idaho with his mother and has a very special power - the ability to shock. Michael's mother wants him to keep his power secret and Michael has done so with the exception of telling his best friend, Ostin Liss, who lives next door. But one day Michael is being beat up by three bullies, Mitchell, Wade, and Jack. The three caused Michael to be in detention just a few days earlier and he's angry when they attack him again. He shocks them but tells his mother he doesn't believe anyone will believe them, even if they do tell on him. However, another student also sees what happens - a cheerleader named Taylor Ridley. Taylor has similar powers and they are soon comparing notes. They form a club and include Ostin.

Taylor is adopted. She starts researching her birth with Ostin's help. They discover that she and Michael were born in the same hospital within days of each other but that the hospital records are missing. They also find that a medical company named Elegen had been testing a new magnetic imaging technology at that hospital at the time Taylor and Michael were born. Then Taylor and Michael are invited to attend an elite school, the Elgen Academy in Pasadena. Taylor and Mrs. Vey are kidnapped and Michael believes they are being held in Pasadena. He plans to go looking for them and convinces Jack and Wade to drive him there. Ostin insists on going along.

The Elgen Academy is actually just a ruse created by the designer of the magnetic imaging technology, Dr. C. James Hatch. There are thirteen surviving children with powers similar to those of Taylor and Michael. They are referred to as "Glows" because they all give off a faint glow. Hatch uses the children for elaborate blackmail schemes. At the time of Taylor's arrival, he has just had one of the children crash two plane, prompting several airlines to pay millions of dollars for an assurance it won't happen again.

Some of the children have been with Hatch since they were very young. Taylor discovers that she has a twin sister, Tara, who has lived at the academy almost constantly since she was six and that Hatch became her guardian after the death of Tara's adoptive parents. Taylor immediately suspects that Hatch killed Tara's parents in order to gain control of Tara. Tara will not consider that possibility.

Michael is able to free Taylor but Hatch leaves the compound before Michael can get to him. Michael learns that his mother is being held at another of the Elgen compounds and pledges to find her. Ostin, Taylor, Wade, and Jack insist that they'll go with Michael. They are joined by several of the Glows who have escaped Hatch's control.

More summaries and resources for teaching or studying Michael Vey: The Prisoner of Cell 25.