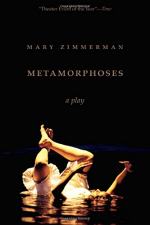 Mary Zimmerman
This Study Guide consists of approximately 55 pages of chapter summaries, quotes, character analysis, themes, and more - everything you need to sharpen your knowledge of Metamorphoses.

The following version of this book was used to create this study guide: Zimmerman, Mary. "Metamorphoses,” based on David R. Slavitt’s translation of “The Metamorphoses of Ovid.” Northwestern University Press, 2002. First Hardcover Edition. Following a short Prologue, the play’s overall narrative follows a structural pattern in which one dramatized myth from Greek mythology flows into another. Two key points to note about the piece’s style of presentation: it is intended to be staged in and around a large, onstage, pool of water; and the stories are told both through narration and through dramatization (i.e. acted out).

The Prologue begins with the image of a woman staring into the pool. She, a scientist, and a manifestation of the god Zeus address the audience, discussing the nature, needs, and the inquiring spirit of humanity.

Characters from the Prologue introduce the first story dramatized by the play as a whole – the well-known tale of King Midas, who wishes that everything he touches would turn to gold, and quickly learns that it is not always advisable for people to get everything they wish for. The end of that story flows into the beginning of the next – the story of Alcyone and Ceyx, a royal couple first parted by a sea voyage and then by death, only to have their love immortalized by the gods.

This pattern of narratives flowing one into the other continues throughout the rest of the play, as the story of Alcyone and Ceyx flows into the little-known story of Erysichthon, a greedy man who violently disrespects the goddess Ceres, who then curses him and dooms him to self-destruction. The story of Erysychthon, in turn, transitions into the contrastingly well-known tale of Orpheus, a god-like musician who loves the beautiful Eurydice so much that after she dies, he follows her to the realms of the dead and pleads for her release. Hades, the god of the underworld, agrees to his request – but only if he meets certain conditions. When Orpheus fails, Eurydice is returned to the world of the dead forever. This particular version of the story looks at the ending from two different perspectives – that of Orpheus (which is the particular point of view considered by the ending), but also that of Eurydice.

This story of doomed love is followed by a love story that ends more successfully. The god of springtime, Vertumnus, is so drawn to the wood nymph Pomona that he dons a series of disguises in order to plead his own case with her. In one of those disguises, he tells her a story about how dangerous it is to ignore the power of the goddess of love. Pomona, however, sees through his disguise, and the two of them (according to narration) enter into a relationship. This story is followed by that of Phaeton, the son of the god Apollo who is so desperate to prove that he is who he says he is that he foolishly and recklessly decides to follow in his father’s path of guiding the sun across the sky, an escapade that results in tragedy. A key point to note about this story is that it is told in a very contemporary way, with Phaeton describing what happened to a character referred to as The Therapist, and who speaks in contemporary terms common to the practice of psychotherapy.

The piece’s two final stories return to the theme of love. The second-to-last story is that of the god of love (Eros) and a goddess-like embodiment of the soul (Psyche), and how their love survived a series of challenges so powerfully and so beautifully that the god Zeus turned them into stars, and enabled them and their love to live forever. The final story in the play is that of Baucis and Philemon, an elderly married couple whose compassion and hospitality to a pair of disguised gods earns them an eternal gift.

As the story of Baucis and Philemon ends, the character of King Midas reappears, having done what the gods have told him needs to be done in order to dispel the golden touch and who is reunited with his loving daughter. With their embrace, the play comes to its end.

More summaries and resources for teaching or studying Metamorphoses: Play.