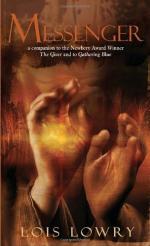 This detailed literature summary also contains Topics for Discussion and a Free Quiz on Messenger by Lois Lowry.

Young Matty is struggling to understand his strange and mysterious gift of healing powers just as the altruistic society he lives in begins to experience disharmony. A growing group of citizens demands to close its borders. At the same time, the Forest that once welcomed Matty now darkens and thickens to prevent passage. When Matty's caregiver, Seer, enlists Matty's help to travel through the Forest and return with Seer's daughter before the border closure, Matty must call upon all of his courage to journey through increasingly dangerous Forest.

Matty was once a young troublemaker from a broken home and once referred to himself as Fiercest of the Fierce. After arriving at Village, the community cared for Matty. Now a boy on the verge of adulthood, Matty lives with a blind man called Seer. Matty assists Seer with cooking and caring for the house. Seer considers Matty a son.

In a mysterious evening walk to the Forest, Matty seeks out a small frog. For reasons unknown, Matty is confused and fearful of the small animal. On the return trip home, Matty hears mournful singing, or keening. Gatherer was entangled and killed by Forest, which is a dangerous place for most citizens. However, Forest has had a mysterious kinship with Matty, always allowing Matty to pass through unscathed and even providing food by way of fish and berries. Matty, who delivers messages for the community because of his easy passage through Forest, hopes to be named Messenger in the near future.

Matty's friend Ramon brags about his family's new Gaming Machine his family has acquired. Matty pleads with Seer for a Gaming Machine, but Seer does not approve of Trade Mart, which is where Ramon's family bartered for the machine. Matty desires to attend Trade Mart, but Seer disapproves. Matty insists on attending and Seer eventually agrees but asks Matty to promise not to trade anything. Matty is confused because he has nothing to trade. At Trade Mart, Matty is disturbed by what he observes among the villagers. The atmosphere is serious and dark, and Matty notices that villagers he thinks of as kindly now exhibit harsh mannerisms.

Jean, Matty's friend, offers Matty a puppy from her dog's recent litter. When the dogs fall ill and most of the litter dies, Matty places his hands on the dog and puppy. Immediately, the dogs make a recovery, but Matty is exhausted and drained. In a flashback, Matty recalls stepping on a frog in the Forest, injuring its leg. When Matty touched the frog's leg, it was healed. Matty falls asleep.

Later, the growing desire to close the Village borders causes an uncomfortable situation for newcomers who arrive at Village. Mentor leads a group of citizen who protest against allowing newcomers into Village. Leader diffuses the situation temporarily, but the Village eventually votes to close the border. After the decision is finalized, Seer asks Matty to travel through Forest to a neighboring community. Seer's daughter, Kira, will not be able to return to Village once the borders are closed, and Seer asks Matty to retrieve her before the wall is erected. Matty agrees, but Leader warns Matty that Forest is becoming increasingly dark and dangerous. Matty insists on leaving, thinking of his promise to Seer.

On his way to find Kira, Matty notices small changes in Forest. The paths are denser than before and he smells a foul odor that he never smelled before. When Matty reaches Kira, he offers to heal her twisted leg, but she declines. Matty and Kira depart for Village, but Forest is increasingly hostile. Twigs cut Kira's feet and acidic sap painfully wounds Matty. Leader, who is watching over Kira and Matty by using his gift of seeing beyond, discovers that Forest plans to kill the two travelers. Leader ventures into Forest in a rescue attempt, but becomes trapped by Forest's vines.

Injured and near death, Matty encourages Kira to use her gift of seeing the future to reach out to Leader. Kira and Leader unite their gifts and communicate with one another. Leader tells Kira to ask Matty to use his gift. Confused, Matty instinctively places his hands on the ground. Matty calls forth his gift and heals the earth. The discord and desire to build the Village wall disappear. Kira and Leader's injuries are healed. Forest returns to its original state, no longer a dark and hostile place. With the last of his life force, Matty heals his world. After Matty's death, Leader gives Matty his true name of Healer.