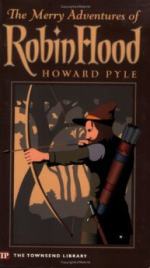 The Merry Adventures of Robin Hood Topics for Discussion

Howard Pyle
This Study Guide consists of approximately 54 pages of chapter summaries, quotes, character analysis, themes, and more - everything you need to sharpen your knowledge of The Merry Adventures of Robin Hood.

1. As the prologue indicates, Robin is outlawed when he shoots one of the King's deer on a wager and then kills a forester. Should Robin be outlawed for this? Who is in the wrong—Robin or the forester?

2. Little John tumbles Robin into the stream during their bout with the quarterstaff, and then refuses to accept Robin's invitation to join his band. Why does Little John initially refuse? Why does he change his mind?

3. After he kills the forester, Robin decides to avoid direct confrontations and bloodshed. The narrator remarks that Robin's long reign in the greenwood is directly attributable to this avoidance.

What strategies does Robin resort to instead of direct confrontation with his enemies? Cite several specific examples of these strategies as employed by Robin Hood.

4. Robin is always quoting the wise sayings of a certain "Gaffer Swanthold."

More summaries and resources for teaching or studying The Merry Adventures of Robin Hood.