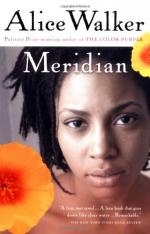 Plot Summary
+Chapters Summary and Analysis
Meridian: The Last Return and The Wild Child
Meridian: Sojourner, Have You Stolen Anything?, and Gold
Meridian: Indians and Ecstasy, English Walnuts, and The Happy Mother
Meridian: Clouds, The Attainment of Good, Awakening, and Battle Fatigue
Meridian: The Driven Snow, The Conquering Prince, and The Recurring Dream
Truman Held: Truman and Lynne: Time in the South, Of Bitches and Wives, and The New York Times
Truman Held: Visits, Lynne, and Tommy Odds
Truman Held: Lynne and On Giving Him Back to His Own
Truman Held: Two Women and Lynne
Ending: Free at Last, Questions, and Camara
Ending: Travels, Treasure, and Pilgrimage
Ending: Atonement: Later in the Same Life, Settling Accounts, and Release
Free Quiz
Characters
Objects/Places
Themes
Style
Quotes
Topics for Discussion
Order our Meridian Study Guide

Alice Walker
This Study Guide consists of approximately 36 pages of chapter summaries, quotes, character analysis, themes, and more - everything you need to sharpen your knowledge of Meridian.

This detailed literature summary also contains Topics for Discussion and a Free Quiz on Meridian by Alice Walker.

Meridian is the story of a young black woman, Meridian Hill, in the 1960s. Meridian gets pregnant in high school and has a short-lived marriage with her child's father, and then joins the Civil Rights Movement and gives up her son to go to college. Meridian finds herself unable to commit to the violence of the Civil Rights Movement and begins becoming ill, a manifestation of her conflicts about the injustice she sees in the world. Meridian travels to small, poor, black areas of the South, registering voters and fighting injustices, until she finally heals herself.

Meridian is born to a former schoolteacher who feels resentful of her children for stealing her freedom. Meridian's mother doesn't tell her anything about sex, and Meridian begins having sex at an early age. She gets pregnant without realizing what it will mean and marries the father, Eddie. Almost immediately, their marriage begins falling apart. Eddie leaves, and Meridian hates her baby. Then, a house of civil rights workers is bombed, and Meridian becomes interested in the movement. She joins the movement and meets Truman Held, a pretentious, French-speaking activist. Meridian begins to love Truman.

When Meridian is offered a scholarship to attend college, she defies her mother and gives up her son to go to college in Atlanta. There, her life is balanced between a school that teaches social niceties and the horror and violence of the Atlanta Civil Rights Movement. Her relationship with Truman is also stressful, since he begins dating white exchange students. Truman and Meridian finally have sex, but then Truman leaves her. Meridian is pregnant and undergoes a painful and shaming abortion. Meridian starts having physical symptoms like blindness and paralysis that are manifestations of her stress and conflict.

Meridian's roommate is Anne-Marion, and they are involved in a revolutionary group. However, when Meridian is asked if she can kill for the revolution, she cannot commit to killing. Meridian leaves for small towns where she lives in poor black communities, fighting injustice and registering people to vote. Meanwhile, Truman marries Lynne, a Jewish exchange student. When the movement turns more angry against whites, Truman begins to regret his marriage. A friend of Truman's, after being shot and losing his arm for being seen with a white woman, rapes Lynne. Lynne is traumatized, and her marriage is falling apart. She gets pregnant by Truman and has a child, Camara. She moves to New York. Five years later, Camara is beaten to death in a hate crime. Meridian, who Truman has continued coming to periodically during his marriage, comes to New York to comfort Truman and Lynne in their grief.

Later, Truman joins Meridian in the South to work with poor black families. She heals herself, working through her conflicts with violence and justice, and leaves, but Truman takes her place. He needs to work through his own healing.

More summaries and resources for teaching or studying Meridian.