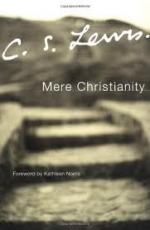 Describe the Heaven and hell in which Lewis believes.

Analyze Lewis' argument for Christianity and compose a rebuttal.

Why does Lewis accept the biological theory of evolution?

How does Lewis justify the idea of a perfect Creator making an imperfect world?

How should a Christian behave, according to Lewis?

Compare and contrast another Christian view with that of Lewis.

Write a 30-second commercial for Christianity based on the views of Lewis.

Why must God have three parts?

How virtuous must a Christian be before earning everlasting life?

What are the Cardinal Virtues, and why are they named Cardinal?

According to Lewis, hat role does the devil play in the story of humanity?