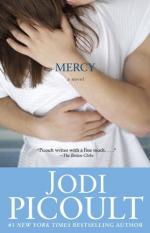 Jodi Picoult
This Study Guide consists of approximately 58 pages of chapter summaries, quotes, character analysis, themes, and more - everything you need to sharpen your knowledge of Mercy.

This detailed literature summary also contains Topics for Discussion and a Free Quiz on Mercy by Jodi Picoult.

Mercy is a novel that explores the meaning of not only the word mercy, but love and loyalty, as well. The novel begins with a man confessing to the mercy killing of his wife who was suffering a painful and slow death to cancer. However, this man's story is second to that of the police chief, Cameron McDonald, who finds the love of his life five years after marrying the woman in his life. Cam is a man to whom responsibility is a suffocating burden he must bare. In rebellion against this weight, Cam breaks his loyalty to his wife and explores a relationship with a woman who has the freedom he craves. It is not until his wife learns of this affair that Cam finally realizes that he never really intended to leave his wife or the life they have built together. Mercy is a story of the tests that challenge people everyday and the mistakes that define a life.

Cameron McDonald goes to have lunch with his wife in her flower shop and finds himself face to face with a woman who makes his heart jump into his throat. Before Cam can even ask her name, he is called back to the police station. It seems a man wants to confess to murder and will only do it with the police chief, Cam. Cam finds Jamie McDonald, a cousin of his, waiting at the police station in his pickup truck. Jamie tells Cam that he killed his wife. Cam sends Jamie's wife to the funeral home where the local coroner works while he interviews Jamie. Jamie freely gives a confession, telling Cam how he held a pillow over his wife's face until she stopped breathing. Jamie says he did this, because his wife asked him to. Jamie's wife, Maggie, was suffering from an incurable cancer and was in a great deal of pain.

Cam does not want to charge Jamie, but because Jamie has scratches on his face and hands, he cannot be completely convinced that Maggie was a willing participant in her own death. Cam charges Jamie with murder, but then hires a local attorney anonymously to defend Jamie. Allie, Cam's wife, is fascinated with Jamie and Maggie's story and the idea that Jamie could do such a powerful thing in the name of love. Allie goes to visit Jamie and insinuates herself in his life.

Allie has hired Mia Townsend to work in her flower shop. Mia is new to town, but when Cam looks at her, he feels as though he has known her his entire life. The more time Cam spends with Mia, the stronger this feeling becomes. When Cam comes home early from work one afternoon and finds Mia snooping in his bedroom, he cannot help the feelings that overwhelm him. Cam kisses Mia. Guilt overwhelms him soon after, and he resolves himself to staying faithful to his wife. This resolve goes flying out the window, however, when Allie makes Jamie's case her only focus.

When Allie leaves town to help gather character witnesses for Jamie's trial, Cam begins an affair with Mia. At first, the affair is passionate and dangerous, adding an excitement to Cam's life that has been missing since he was forced to return home by his father's death. However, when Mia confesses her love for Cam, the affair becomes too serious. Cam ends the affair. A few days later, Mia leaves town without leaving a forwarding address. Cam cannot stop thinking about Mia. Cam begins to regret ending the affair and decides to search for Mia. Cam hires a private detective to search for her. Within a few days, Cam finds Mia in a nearby town and convinces her to return.

Cam and Mia begin to see each other on a weekly basis. Cam lies to Allie often, but she is so involved in the preparation for Jamie's trial she does not see through Cam's stories. At Christmas, Cam arranges a weekend getaway for him and Mia. During the trip, Cam tells Mia that he has decided to leave Allie so that he and Mia can be together. Cam imagines that he and Mia will be free to travel the way he has always wanted to do. However, what Mia really wants is the life Cam has with Allie. When Mia realizes that this is not the life Cam is willing to offer her, Mia decides she must leave, this time for good. At the same moment Cam discovers Mia's disappearance, Allie discovers some pictures in Cam's luggage that reveal the affair. Allie has a massive yard sale, selling all of Cam's belongings. However, Allie does not ask him to leave. Instead, Allie tells Cam that she still loves him, she simply does not trust him.

Jamie's trial opens the morning after Allie's discovery. Cam gets on the stand and does little to help the defense. However, several character witnesses come forward who successfully convince the jury that Jamie's actions were based on a type of temporary insanity caused by his intense love for Maggie and her terrible pain. The jury acquits Jamie. Cam and Allie arrange for Jamie to remain in town until he can decide what he wants to do with the rest of his life. Cam and Allie also have decisions to make regarding their future and hope to make them together.

More summaries and resources for teaching or studying Mercy.