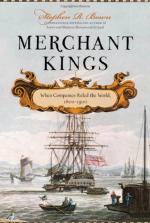 Merchant Kings' is the story of six men who led the colonial mercantile enterprises that accomplished the spread of European political power throughout the world. These men include: Jan Pieterszoon Coen, who led the Dutch East India Company during the years of its nutmeg monopoly in Indonesia; Pieter Stuyvesant, who led the Dutch West India Company when it was administering the colony at New Amsterdam; Robert Clive, who ran the English East India Company in India; Aleksandr Andreyevich Baranov who ran the Russian American Company; George Simpson who ran the Hudson Bay Company in Canada, and Cecil John Rhodes, the head of the British South Africa Company. The stories start with the earliest of the colonial-commercial enterprises, in the Dutch East Indies, when force could be used with impunity, and natives could simply be displaced without a qualm. The monopoly was the most important thing for Coen and he maintained it by destroying the livelihoods of anyone who opposed him. By the time the stories reach their most recent story with Cecil John Rhodes in South Africa, the use of force against native people was highly controversial. Even though there was a new Darwinian language for stating the superiority of one race over another, that language had also given birth to a vocabulary of equal rights and protections. Cecil Rhodes' legacy is therefore perhaps the most controversial of the six merchant kings whose stories that Brown tells.