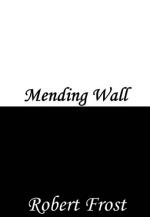 Robert Frost
This Study Guide consists of approximately 26 pages of chapter summaries, quotes, character analysis, themes, and more - everything you need to sharpen your knowledge of Mending Wall.

"Mending Wall" (1915) is Robert Frost's tribute to one man's notion of being a good neighbor, even as that notion is the opposite of his own. It is the opening poem in Robert Frost's second collection of poetry, North of Boston (1915). Homesick for America, Frost wrote "Mending Wall" while living in England with his wife and four children before World War I. Napoleon Guay had been Frost's neighbor in New Hampshire a few years earlier and inspired the poem, "Mending Wall." Apparently, French-Canadian Guay made an impression on Frost by often repeating the phrase, "Good fences make good neighbors," during the routine repairs on the wall between their farms.

The idea of "good fences" is one of personal boundaries, evoking the American pioneer mentality of staking a claim and taking ownership. With this poem, Frost questions that version of the American dream and hints at another version. After becoming a well-known poet, Frost was eager to reclaim his own space in New Hampshire; "Mending Wall" illustrates the personal and natural freedoms, as well as limitations, of a rural existence. The poem questions the necessity of a wall, like questioning the wisdom of perpetuating an old habit. In America, a land of vast frontier, do we need walls to maintain relationships with others? This question becomes even more interesting in light of Frost's later position as American "goodwill ambassador" to South America, and later to the Soviet Union during President Kennedy's administration. In light of his interest in the dilemma of borders in "Mending Wall," it is fitting that he would reach across them to foster positive relations with other people and cultures.

Some scholars consider Frost as a nature poet in the manner of Ralph Waldo Emerson and William Wordsworth or an Imagist in the school of Ezra Pound; however, Frost did not classify himself that way. His poems deal with nature in an everyday, human fashion and are written in the language of ordinary speech. This colloquial tone is relevant for looking at Frost's poems in the context of the American dream: His poetry speaks to the common man with simple, yet evocative images. Frost is easy to approach, not esoteric or verbose, using words that allow the reader to connect with tangible objects and authentic emotion. He uses no pretense, as shown by this straightforward line from "Mending Wall": "We keep the wall between us as we go." His popularity and resonance with common Americans earned him the nickname America's Poet. He writes of home, of "yelping dogs," apple trees, and rough fingers. His poems recall a simpler, idealized time of prosperity and fertility.

As America's Poet, Frost received a multitude of awards and distinctions, including four Pulitzer Prizes. Though popular with the public, Frost did not participate in the modernistic, free-verse experiments of his fellow poets. He preferred to convey his thematic messages through meter, rhyme, and form. The U.S. Senate passed a resolution dedicated to Frost on his seventy-fifth birthday, declaring that "His poems have helped to guide American thought and humor and wisdom, setting forth to our minds a reliable representation of ourselves and of all men."

More summaries and resources for teaching or studying Mending Wall.