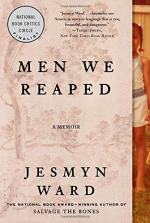 Jesmyn Ward
This Study Guide consists of approximately 81 pages of chapter summaries, quotes, character analysis, themes, and more - everything you need to sharpen your knowledge of Men We Reaped.

This detailed literature summary also contains Topics for Discussion on Men We Reaped by Jesmyn Ward.

The Men We Reaped, by Jesmyn Ward, is the story of her life as well as the lives of five young Black men in her community who die early deaths. In her memoir, Ward seeks answers for the causes of these frequent early deaths as well as to give voice to the story of life as a Black person in the South. The Men We Reaped falls within the memoir genre. Like most memoirs, the book is written entirely in the past tense as the author reflects on her past as a child and as a young adult experiencing the deaths of her brother and friends.

Ward describes the small towns of DeLisle and Pass Christian where she grew up. She remembers riding with her siblings to visit her father and telling ghost stories. She is driven to write her memoir when she realizes that she can no longer stay silent about the deaths that have occurred in her community.

Ward’s family history is full of violence, substance abuse, early deaths, racism, and women raising children on their own. Both of Ward’s parents come from broken homes. Ward’s father moves to California as a young man and her mother follows. The two marry.

Roger is the last of the five men to die. Ward gets to know him through Charine. Rog is a cocaine user and dies from a combination of cocaine and pills that causes him to have a heart attack.

Ward is born a sickly child in California. She survives despite being given poor odds and her parents are convinced she is a fighter. Ward’s father becomes homesick and wants to move back to Mississippi. Ward’s mother doesn’t want to go, but agrees to because she loves her husband and is pregnant with Joshua.

Joshua and Ward learn lessons about violence when Ward is attacked by a pit bull and Joshua is involved in a moped accident.

Nerissa is born and Ward’s parents begin fighting. Ward’s mother realizes that her husband will never be faithful.

Ward meets Demond at Nerissa’s apartment. He’s different from other boys because he was raised in a stable, two parent home. He takes his responsibilities seriously and testifies in trials against a murderer and a drug dealer. He is shot as he comes home from work one night.

Ward’s father uses money being saved to buy land for a home to buy a motorcycle. The family moves in with Ward’s grandmother Dorothy.

Ward turns to books to escape her chaotic world in which her parents fight and her father leaves for weeks at a time.

While living with her extended family, Ward learns that life is easier for boys. Her cousin Aldon is not punished for smoking, but she is. She also sees the way her father gets to ride away on his motorcycle. She seeks to gain her father’s approval by eating a raw oyster and climbing her rope swing.

C.J. is Ward’s cousin whom she first got to know when he was six. C.J. is extraordinarily athletic and likes to show off. He dates Charine and is loyal and protective, but his behavior is sometimes erratic. C.J. snorts cocaine. He often tells people he feels like he won’t be around for long. C.J. dies when the car he is in is struck by a train as they cross the tracks where the signal lights are broken and there is no reflective arm.

Ward’s father has left and Ward’s mother moves them to Orange Grove. Ward’s mother begins working as a housekeeper for a rich White family. Ward begins to hate herself and becomes depressed. Ward’s mother gives Ward the responsibility of helping to care for her younger siblings and take care of the house. Ward’s grades decline and a boy tries to force himself on her, which she believes she deserves. The children miss living in DeLisle so Ward’s mother buys some land there and they move back.

Ward meets Ronald when she is a counselor at a day camp and he is a camper. He’s funny and confident. As an adult he seems happy to Ward who later learns that he suffers from depression and drug abuse. Ronald commits suicide.

Ward’s mother’s employer offers to pay her tuition to attend a private school because she is being bullied. She is the only Black girl there and has several experiences of racism.

Her father is living in New Orleans. She and her siblings visit him there sometimes. Her mother sends them with bags of groceries because she doesn’t trust their father to feed them.

Ward asks her mother to allow her to go to boarding school in California to escape the racism at her school. Her mother refuses. Ward makes herself a promise that she will go to college out of state.

Ward begins to explore literature written by Black authors because she is sometimes appalled at the way Black people are written about in other books.

She gets drunk for the first time at the age of sixteen and has a hangover the next day. Joshua advises her to try marijuana because it doesn’t cause hangovers.

Ward learns that Joshua is selling crack to earn money to help his father pay the bills.

Joshua is the first of the young men to die. Ward moves home after completing her master’s degree. She and Joshua both try to find jobs. Joshua takes a job as a valet at a casino. Ward is unable to find work, so she goes to New York for interviews. While she is there, Joshua is hit by a drunk driver and he dies. The man, who is White, receives a very light sentence.

Ward returns to New York and considers cutting her wrists. She tattoos one wrist with Joshua’s name and the other with the signature he used on letters to her to prevent herself from committing suicide.

Ward leaves New York and learns that her grief will never leave her, only change over time. Ward’s father stops working after Joshua’s death and her mother spends every anniversary of his death locked in her room. Ward also locks herself in her room to cry on his death anniversary.

Ward remembers how special it made her feel when Joshua would ask her to ride with him in her car. She imagines that when her life is over, Joshua will ride up and ask her to go for a ride one more time.