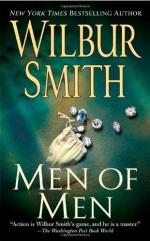 Wilbur Smith
This Study Guide consists of approximately 55 pages of chapter summaries, quotes, character analysis, themes, and more - everything you need to sharpen your knowledge of Men of Men.

This detailed literature summary also contains Topics for Discussion and a Free Quiz on Men of Men by Wilbur Smith.

Men of Men by Wilbur Smith is a story of greed, exploration, adventure and love. It is a gripping saga that follows the lives of the Ballantyne men and Zouga Ballantyne's unrelenting desire to make the wilds of northern Africa his home. In his pursuit of enough of a stake to enable him to settle, he loses his wife and almost loses his sons. He purchases two mines but gambles them away leaving the family penniless, but in the true spirit of adventure and determination, both sons find their own way to make their mark on the land. Ralph becomes successful operating the first and only reliable transport company in northern Africa, and Jordan becomes the right hand man to Cecil Rhodes, whose vision will earn millions and unite the many small holdings that make up the concessions of the wilderness. Sadly, both also carry the gene from their father that spurs them to win at all and any costs, without concern for consequence. In their own ways, each of the Ballantyne men will contribute heavily to the slaughter and dissolution of the Matabele tribe, chasing them almost into extinction. In the pursuit of gold, diamonds and then land, slowly a few strong men lead the charge, each with their own agendas.

Zouga falls in love with the woman he believes is married to his longtime friend Mungo St. John, but when he finds out their marriage is a lie, he reveals his feelings even as he helps to save Mungo's life. Mungo lives to continue on his path of deceit and treachery, all to advance his own personal coffers, and when he falls in love with Zouga's sister Robyn, he even conspires to free her from her husband Clinton by sending him to his death at the hands of the Matabele. The Matabele are willing to share most everything they have, but when the greed of the white men threatens their very lives and livelihoods, they strike back. In the bloody battle that ensues, the Matabele are seriously outgunned, and many die in defense of their king. Their loyalty is commendable, King Lobengula takes their deaths hard. Forced from his land, he flees with the remaining members of his tribe, but still the white men will not leave him be. They take everything King Lobengula holds dear, force him off his land, and hunt him down - determined to take him in. They will not succeed. Lobengula dies the king that he lived and his brother Gandang will take up leadership of the remaining tribe members until the call to take up arms against the white man comes again.

More summaries and resources for teaching or studying Men of Men.