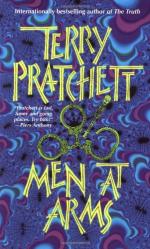 Men at Arms: A Novel of Discworld Summary & Study Guide

Men at Arms: A Novel of Discworld Summary & Study Guide includes comprehensive information and analysis to help you understand the book. This study guide contains the following sections:

This detailed literature summary also contains Topics for Discussion on Men at Arms: A Novel of Discworld by Terry Pratchett.

Men At Arms is a novel set in the magical universe of the Discworld, by author Terry Pratchett. It returns to the city of Ankh-Morpork, one of his most well developed settings in the Discworld novels and the characters who are employed as members of the Night Watch of the city. Here we find the Captain of the Night Watch (Captain Vimes), as well as Corporal Carrot the classic fantasy 'hero' who is actually heir to the throne of the city, the old watch members Fred Colon and Nobby Nobbs, as well as the 'new' recruits Angua, Detritus and Cuddy.

The Discworld is a magical setting with modern sensibilities. The author satirizes all of the usual fantasy trope ranging from wizards and their staffs to mountain trolls, greedy dwarves and mad inventors. He also gives them an urban and modern feel (although it still remains a fantasy world, with magic and technology similar to the Renaissance era of our own times). The city of Ankh-Morpork is the largest and the most successful of all of the cities on the Disc, and it, characteristically is full of crime, Guilds, murderers and thieves. At the start of the setting we discover that Captain Vimes is about to retire as he is to marry one of the wealthiest women of all of the city; Lady Sybil Ramkin. Just before this happy event the Watch has been swelled by the introduction of an equal opportunities bill, encouraging members from the 'minority' groups of the city to join. This means that Detritus is a Troll, Cuddy is a Dwarf and Angua is in fact a werewolf. As racial tensions are on the rise throughout the city, a series of murders plagues the city, all perpetrated by a new sort of weapon (a 'Gonne'). It becomes clear that the bearer of the firearm is actually trying to bring disorder into the city so that the Patrician (the leader) will be overthrown and the rightful king (presumably Carrot) will be put on the throne of the city.

Men at Arms: A Novel of Discworld from BookRags. (c)2022 BookRags, Inc. All rights reserved.