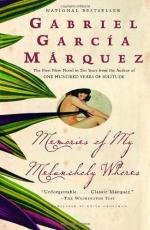 Gabriel García Márquez
This Study Guide consists of approximately 28 pages of chapter summaries, quotes, character analysis, themes, and more - everything you need to sharpen your knowledge of Memories of My Melancholy Whores.

Memories of My Melancholy Whores Summary & Study Guide includes comprehensive information and analysis to help you understand the book. This study guide contains the following sections:

This detailed literature summary also contains Topics for Discussion and a Free Quiz on Memories of My Melancholy Whores by Gabriel García Márquez.

Memories of My Melancholy Whores is an erotic novel of nostalgia by famed writer Gabriel Garcia Marquez. The unnamed narrator has just turned ninety and has decided to give himself the gift of a night with a virgin. However, after ninety years of never knowing the sweetness of love, the narrator does not anticipate falling in love with his young companion. The narrator finds himself obsessed with this young woman despite the fact that they never share a conversation and never consummate their intimate relationship. Memories of My Melancholy Whores is a novel of personal growth, of facing one's mortality, and discovering love for the first time.

The unnamed narrator is about to celebrate his ninetieth birthday, so he decides to give himself the gift of a virgin. The narrator calls a madam he has done business with in the past, though not recently, and asks her to arrange the encounter. The madam protests the difficulty of the request, but agrees when the narrator agrees to an increase in fees. A short time later the madam calls and tells the narrator she has arranged for a fourteen-year-old girl to be waiting for him at her establishment that night. The narrator dresses in his finest clothes and takes a cab to the brothel. There the narrator has a drink with the madam before being directed to the room where the virgin waits. To calm the girl, the madam has fed her a home remedy that has put her to sleep. The madam suggests the narrator take the girl's virginity without waking her in order to protect her from the pain of the experience. The narrator undresses and lies with the virgin, but finds himself reluctant to take advantage of her vulnerable state. The narrator simply sleeps at the girl's side, enjoying the feel of sleeping next to another person. The next morning the narrator leaves without speaking to the girl.

The narrator cannot stop thinking about the young girl with whom he spent his birthday. The experience has reminded the narrator of the many women he has shared a bed with in the past. Every woman the narrator has ever shared a bed with was a woman he paid for the pleasure. One of these women is his housekeeper, a woman twenty years younger than him who still comes to his house once or twice a week to clean. The narrator recalls an afternoon when he was watching her do the laundry and was overtaken with desire. Afterward, feeling a small amount of guilt, the narrator increased the housekeeper's salary in order to compensate her for fulfilling his desires once a month.

The narrator calls the brothel owner again and arranges to share another night with the virgin. Again the narrator only sleeps beside her, imagining a relationship that does not exist. The narrator continues to think about this girl even when at home alone with his cat. Soon the narrator finds himself spending every night with this girl. The narrator is obsessed, believing himself to be in love for the first time in his life. The narrator has never been in love or married, but he was once engaged. The narrator had promised his mother he would someday get married and have a daughter he could name after his mother. The narrator got engaged to a woman he was deeply attracted to, but quickly discovered he had nothing to talk to her about. When the day of the wedding came, the narrator could not make himself go through with it. The narrator simply failed to show up to the church, causing himself and his fiancée a great deal of embarrassment.

The narrator spends nearly every night with his virgin, despite the fact that they never speak and he never learns her real name. One night, a man is killed at the brothel. As a result the brothel is closed for several weeks. The narrator goes crazy waiting for his virgin to return. When she does, the virgin is dressed so nicely that the narrator believes she has become a prostitute. The narrator becomes enraged, destroying the room where they have spent all their time together. The narrator declares he will never see the girl again. However, after a few months, the narrator is consumed with desire to see his virgin again. Swallowing his pride, the narrator returns to the brothel and spends the night of his ninety-first birthday with the young, nameless girl.

More summaries and resources for teaching or studying Memories of My Melancholy Whores.

Memories of My Melancholy Whores from BookRags. (c)2022 BookRags, Inc. All rights reserved.