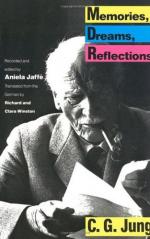 This book is not an exposition of Jungian psychology at all. However, for those who enjoy discovering the development of someone's thought, this book provides a wealth of knowledge. This version of the work is an English translation as Carl Jung was unquestionably German in the earthy, ancestral, vibrant, and cultural sense of the term.

This book came into being when he was an old man, over eighty years old. He was able to do it by working with a much younger but well full grown individual. The work is actually autobiographical. It is specifically because of the connections between the subjective mind and the objective truth that this might be of value for those interested in Jungian psychology. Naturally it is also handy for "fans" of Jung.

The work has been translated into English from the German by a man and woman team who may well be related. The quality of the translation is very high with respect to ease of read, but it does add a mysterious sense of distance based in the fact that there is another layer of people between the original speaker, Jung himself and readers.

Carl Gustav Jung was born in the 1800s and lived into the 1900s. He was the son of a pastor but no indication of his mother's profession, if she had one over and above being wife and mother, is given. When he was a child, women did not have the vote in Germany. The mechanization of culture increased dramatically during his lifespan, so that in addition to trains and boats, people of the world had wildly increased access to privately owned and run automobiles and even new alternate forms of aircraft.

This book developed decades after Jung had completed the bulk of his life's work, including the volumes of his new form of psychology. It is not clear whether or not he knew how extensive the influence of his research and theoretical writings on psychology would become. His work has only grown since his death, thanks in part to translations. People have studied, tested, experimented, and otherwise worked with his theories to find out whether or not they work. Now "road tested", Jung's work has moved from the avant garde and marginal into the widely respected, and so well liked that it has been popularized and "fed to the masses" in forms designed to enhance its accessibility.

This book allows readers to share insight into the emergence of the contents of Jungian psychoanalytic theory and practice. Perhaps of particular importance is that he shows how this came about within the context the growth of the field of psychology on the whole when he began. It is delightfully true yet hilariously funny that the simplest thing such as actually listening to the psychiatric patients turned out to be valuable. It is extraordinarily helpful that Jung immortalized the obvious. He added to this by taking into account world history, religion, and theology, and the interconnectedness of people to both culture and time when he cultivated his system of psychology. As such, Jung made a great contribution to humanity through the field of psychology, and this autobiography will be a fantastic supplement or background for understanding the formulation of his work.