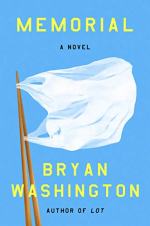 Bryan Washington
This Study Guide consists of approximately 36 pages of chapter summaries, quotes, character analysis, themes, and more - everything you need to sharpen your knowledge of Memorial.

This detailed literature summary also contains Quotes and a Free Quiz on Memorial by Bryan Washington.

The following version of this book was used to create this study guide: Washington, Bryan. Memorial. New York: Riverhead Books, 2020.

The novel opens in Houston, Texas, in the present day. Benson is in his early-to-mid-twenties. He is Black and homosexual. His parents have difficulty accepting his sexuality. When he was diagnosed with HIV several years ago, his parents forced him to move out of their house. His parents are now divorced, due in large part to his father’s alcoholism. Benson works at a daycare, and he lives in an apartment with Mike, his boyfriend of four years.

Mike is estranged from his parents, but he learns that his father, Eiju, has been diagnosed with terminal cancer. Mike decides to go to Japan to see his father before his father dies. However, shortly before Mike’s planned departure, his mother Mitsuko arrives in Houston. Mike departs for Japan, leaving Mitsuko and Benson to live together in the apartment. Mike and Mitsuko have a tense rapport at first, but they grow gradually closer. Mitsuko teaches Benson how to cook some traditional Japanese meals.

A few days or weeks after Mike’s departure, Benson meets Omar, the older brother of one of the children at the daycare. Omar is about the same age as Benson. They begin dating, and they develop a sexual relationship. Meanwhile, Mike is in Osaka, Japan, where his father Eiju lives. Mike and Eiju have not seen or been in contact in many years. The reader learns that Eiju, Mitsuko, and Mike relocated from Japan to Houston when Mike was very young. A few years later, Eiju returned to Japan, and Mitsuko remained in Houston with Mike. After Mike became an adult, Mitsuko returned to Japan but remained mostly estranged from Eiju.

After Mike arrives in Osaka, he and Eiju have a fairly tense rapport. Nonetheless, Mike is determined to remain in Osaka until his father passes away. Mike agrees to work as an employee at the bar that Eiju owns and operates. Gradually, they develop a closer rapport, and Eiju even decides to leave the bar to Mike. During Mike’s time in Osaka, he develops a sexual relationship with a photographer named Tan. Eventually, Eiju dies form his cancer. Mike returns to Houston, bringing Eiju’s cremated remains with him.

In Houston, Benson and Mike talk about the sexual relationships they formed with other people. Mike decides to return to Japan, potentially to run the bar that his father left to him. Meanwhile, Benson decides to continue pursuing his relationship with Omar. Benson’s parents decide to make an effort to have a better relationship with him. They even seemingly begin to accept his homosexuality. In the novel’s final scene, Benson and Mike bring Mitsuko to the airport so that she can return to Japan.

More summaries and resources for teaching or studying Memorial.