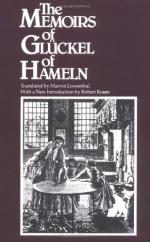 Glückel of Hameln
This Study Guide consists of approximately 38 pages of chapter summaries, quotes, character analysis, themes, and more - everything you need to sharpen your knowledge of Memoirs of Glueckel of Hameln.

Memoirs of Glueckel of Hameln Summary & Study Guide includes comprehensive information and analysis to help you understand the book. This study guide contains the following sections:

This detailed literature summary also contains Topics for Discussion and a Free Quiz on Memoirs of Glueckel of Hameln by Glückel of Hameln.

This work, published in 1932, takes place from 1646 through 1724. The book presents an historical, non-fictional autobiography of Gluckel of Hameln as a Jewish mother and successful businesswoman. She bears fourteen children and raises twelve from infancy through betrothal and marriage in adulthood and even endures the death of some. Gluckel is a faithful and fully God-fearing seventeenth century traditional woman who sets the gold standard for contemporary feminism. Gluckel is a world-traveler and successful global entrepreneur. She helps her husband start and run a gold, precious stones and money-lending business in Germany, Poland, the Netherlands, Denmark and France. When he dies she takes over the business while she raises his children to become successful businessmen, merchants and scholars. Gluckel's second husband is the foremost banker of Lorraine, as rich and well-connected as she is, but apparently lacking her deep-seated sense of faith and peace.

Gluckel writes the "Memoirs" in 1690 for her children "upon the death of your good father" to distract her soul from the burdens and bitterness of his loss. Despite her moralistic perspective this autobiographical book is not a moralistic work. Gluckel is the mother of twelve children with her husband Chayim. She brings up eight as a widow after his death. Gluckel takes over his business affairs and develops a successful global business in the seventeenth century. She makes recommendations to her children to serve God from your heart, set aside time to study Torah, and be honest with both Jews and Gentiles in money and goods. She offers three "magic herbs" to remember including trust in God, hope, and patience. Gluckel confesses to be a sinner who is asking God to grant her repentance. She summarizes expectations for her children in the story of a bird whose third fledgling promises to do to his children what the bird does for him when he grows up by carrying the third fledgling to safety on shore.

This 295 page autobiographical work is comprised of seven books, plus an introduction by Robert Rosen, illustrations and end notes with historical descriptions and commentary. Each book has numbered subsections to indicate periodic journal entries. These are recollections to her children and other heirs that describe her life, times and experiences. The book is an open window into the soul of this very good woman as she recalls living her life. She is deeply saddened by the death of her husband and her writing is therapy for her soul from burdens and bitterness of losing him. The format of the work is effective to the extent each numbered section presents a thought or group of sensitivities to fit that stage of her life. Books are separated by times in her life with, for example Book Five dedicated to "the sickness and death of your beloved father."

More summaries and resources for teaching or studying Memoirs of Glueckel of Hameln.

Memoirs of Glueckel of Hameln from BookRags. (c)2022 BookRags, Inc. All rights reserved.