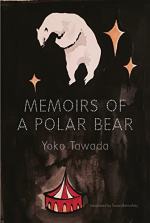 Related Topics
Emissary
Scattered All Over the Earth

Memoirs of a Polar Bear Summary & Study Guide includes comprehensive information and analysis to help you understand the book. This study guide contains the following sections:

This detailed literature summary also contains Quotes and a Free Quiz on Memoirs of a Polar Bear by Yoko Tawada.

The following version of this book was used to create this study guide: Tawada, Yoko. (trans: Susan Bernofsky). Memoirs of a Polar Bear. New Directions Paperbook Original. First edition. 2016. Told in three parts, each with a different first-person narrator, the narrative shifts back and forth between past and present, imagination and reality, animal nature and human nature. The narrative was inspired by the story of a polar bear named Knut, abandoned by his mother and raised by humans in captivity at a zoo in Berlin, Germany.

Part 1 is sub-titled “The Grandmother: An Evolutionary Theory.” The focus of its first-person narration is on the life and experience of a mature female polar bear, who is never identified by name but who has had considerable success as a performer, researcher, and conference presenter. The bear, who initially lives and works in Russia, discovers a need to tell the story of her life. She begins writing it down, and then gives her stories to an unscrupulous publisher, who markets her writing without telling her. The lines between past and present, between what is written and what is remembered blur frequently throughout this section of the narrative, as the bear’s memories of her keeper and trainer (Ivan) keep making their way into her stories. Meanwhile, the bear is lured out of Russia and into the relative safety of Germany, where she continues to write and develops longings to move to Canada. As her memories, and her feelings about those memories, become more intense, the bear’s dreams start to reflect her loneliness and her longing, leading her to a blend of dream and fantasy that introduces the reader to her daughter, Tosca, and her grandson, Knut.

Part 2 is sub-titled “The Kiss of Death,” and is the first person story of an animal trainer whose name is eventually revealed to be Barbara. Barbara lives and works in pre-unification Germany – that is, most of the middle of the Twentieth Century, from the end of World War II (mid-1940’s) to the mid-1980’s. She and her husband Markus are animal trainers in a state circus, and due to Markus’ growing inability to connect with their animals, Barbara finds herself taking on increased responsibility, including developing a new act to highlight the presence of nine Russian polar bears who, early in their working relationship, go on strike. In order to lure them back into working, Barbara builds a new routine around Tosca, grown into an adult and already an established performer. Barbara and Tosca develop a very close relationship, creating an act called “The Kiss of Death,” in which Tosca uses her mouth to take a sugar cube from Barbara’s mouth. Their act becomes world famous, ending only when Germany unifies in the 1980’s, the state circus is no longer operational, and Barbara retires. The final section of Part 2 is told in the voice of Tosca, who is determined to memorialize the life and work of her friend.

Part 3 is sub-titled “Memories of the North Pole,” and is based on the real-world story of a young polar bear named Knut, raised in captivity in a zoo in Germany and something of a celebrity. The central character is Knut, who has the same name as his real-world counterpart and who, in both the book and reality, is / was Tosca’s son. In the book, he is also the grandson of the unnamed grandmother bear in Part 1. Knut’s story begins shortly after his birth, when he is being raised and cared for by a pair of humans, Matthias and Christian. As he grows, in a narrative that echoes the story of his real-world namesake, Knut becomes something of a celebrity. His being raised in captivity comes to represent, for the zoo where he lives and the world at large, the danger to polar bears associated with climate change. Meanwhile, and as he becomes more self-aware, narration starts referring to Knut in the first person, and soon it seems that Knut is telling his own story. As his time with his human friends comes to an end, he finds himself becoming increasingly lonely, and is visited in dreams by the spirit of his grandmother, who encourages him to make something more of his life. Knut, meanwhile, becomes increasingly aware of his public persona and value. As the novel concludes, there is a poetic but clear sense that he is coming to the end of his life.