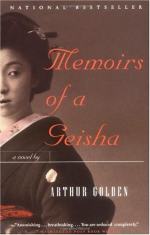 Arthur Golden
This Study Guide consists of approximately 71 pages of chapter summaries, quotes, character analysis, themes, and more - everything you need to sharpen your knowledge of Memoirs of a Geisha.

Memoirs of a Geisha Summary & Study Guide includes comprehensive information and analysis to help you understand the book. This study guide contains the following sections:

This detailed literature summary also contains Quotes and a Free Quiz on Memoirs of a Geisha by Arthur Golden.

Memoirs of a Geisha by Arthur Golden is a novel about the life of Chiyo, also known as Sayuri (once she becomes a geisha). It is an account of a young girl from a fishing village called Yoroido, located on the Sea of Japan whose mother is very ill and whose father cannot fathom what he will do when he is left alone to look after two young girls by himself. One man provides a solution, but it is never clear whether the father understands the entire truth of the arrangement he enters into.

Mr. Tanaka runs the largest company in town – the Japan Coastal Seafood Company. He becomes aware of this family and their situation when he meets young Chiyo for the first time. He can already see what a lovely young woman she will be one day, and he begins to plan even then. Mr. Tanaka tells Chiyo a story about himself and how as a child he lost his parents to death. He was adopted by a wonderful family who gave him every opportunity in life, and he assures her that this could be in her future as well. In fact, not long afterward, he goes to see her father and makes arrangements for both girls to come and spend the night with him and his family, presumably to see if they would like the home and family. Chiyo is thrilled, but Satsu merely follows along, doing as she is told.

The first indication that something may be amiss is when Mr. Tanaka invites a doctor to come and examine the girls. The examination includes confirmation that they are both still intact, but young Chiyo doesn’t understand the implications of such an examination, telling herself that this nice man merely wants to ensure they are completely healthy before taking them on. She has no idea that to him she is merely a commodity who will soon be sold to an okiya where she is expected to one day become a geisha.

Events unfold quickly, and the girls are picked up again soon after this overnight visit, but they are not taken back to Mr. Tanaka’s home. Instead, they arrive at a train station where they are handed from one virtual stranger to another, fed nothing, and travel all day to face a new life. Chiyo is separated from her sister Satsu the minute they arrive in Tokyo. Chiyo is the lucky one of the two sisters, with exotic good looks that makes becoming a geisha a real possibility. Satsu is sold to another house where she is trained in the art of pleasing a man physically.

Memoirs of a Geisha follows Chiyo through her adjustment to the okiya where she is dumped to her eventual adoption by the woman she knows only as Mother – the woman who runs the okiya. This is not a move made out of love or sympathy. It is strictly a business proposition and ensures that all money made by Chiyo in her new life as Sayuri will stay with the house. Of course, the benefit to Sayuri is that one day she will stand to inherit all that the Nitta okiya has, but until then she is a leaf subject to the winds that blow.

First, she is trained in the arts of entertaining from playing instruments to dancing and performing tea ceremonies. Once she is ready, she is dressed in the proper garb of an apprentice geisha. Next, she is attached to an ‘older sister’ by way of a tea ceremony. The older sister will teach her what she needs to know. Then, she is prepared for her mizuage ceremony. This is the ceremony that signifies that her virginity has been sold to the highest bidder. Once she has had her mizuage, she can try to attract a danna. A danna is the man who will pay her expenses and buy her gifts in return for the pleasure of her company whenever he calls. It is a life of servitude, with little to look forward to, but Sayuri dreams. She dreams of attracting the attentions of a single man – the Chairman.

More summaries and resources for teaching or studying Memoirs of a Geisha.

Memoirs of a Geisha from BookRags. (c)2022 BookRags, Inc. All rights reserved.