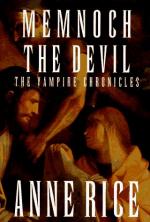 St. Patrick's Cathedral is the one place that Lestat sees as beautiful and hopeful in the tale in the area of New York and later on uses as a place to find his way home.

New Orleans is where Lestat has a townhome residence. It is also where Dora has a convent that she is residing within. Lestat finds his time in this tale traveling between New York and New Orleans when on the earthy realm.

The de Wilde books are twelve books that inspired Roger and began his life in crime. They were a prized procession that his daughter has...