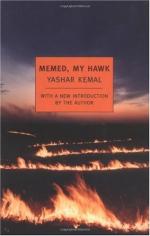 Yaşar Kemal
This Study Guide consists of approximately 45 pages of chapter summaries, quotes, character analysis, themes, and more - everything you need to sharpen your knowledge of Memed, My Hawk.

This detailed literature summary also contains Topics for Discussion and a Free Quiz on Memed, My Hawk by Yaşar Kemal.

Memed grows up in the village of Deyirmenoluk, which is totally controlled by Agha Abdi. At the age of eleven, Memed runs away and gets to the house of Suleyman in the village of Kesme, which is not controlled by Abdi. Memed lives there until he remembers that his widowed mother, Deuneh, will not be able to bring in her wheat harvest alone. He allows himself to be captured, and then he and his mother suffer famine when Abdi takes away an extra amount of wheat for his rental charge. Memed and Deuneh survive the winter only with the secret help of other villagers and by selling their cattle. Years later, at the age of eighteen, Memed secretly goes to town with his friend Mustafa and is shocked to find out that Agha does not have dictatorial control of the town. Memed goes to his girlfriend Hatche and makes a plan to elope with her while Abdi is having Hatche betrothed to his nephew. The couple is chased down by Abdi and his nephew, Veli, with the help of Lame Ali, a man with keen powers of tracking people. Abdi and Veli close in on Memed and Hatche, but then Memed shoots them. Memed flees, while Hatche is allowed to be caught by Abdi.

Veli dies, but Abdi recovers and swears the villagers on the hunt for Memed and Hatche to tell a story that Hatche shot Veli, so Hatche is imprisoned as a murderer. In the meantime, Memed goes back to his old protector, Suleyman, and is brought to a band of brigands led by Mad Durdu. Durdu is known for having his robbery victims strip totally naked. Durdu's band is nearly cornered by police but survives due to Memed's leadership in part. Memed and Jabbar, another brigand, go to get food from a nomad chief Kerimoghlu. When they go back to Durdu he has the band attack Kerimoghlu, but the robbery is interrupted by Memed, who finds it a betrayal of the nomad's kindness. Memed becomes a brigand chief followed by both Jabbar and Sgt. Rejep, who was wounded in the previous fight. They go to Deyirmenoluk to kill Abdi, but find out that he has fled. Next they follow Abdi with the help of Lame Ali, who is now on Memed's side. Abdi is tracked down to Aktozlu village. In the attempt to kill Abdi, all of Aktozlu, a village in the Chukurova plain, is burned down. The brigands escape to a marsh where Sgt. Rejep dies of his wound, and then Memed and Jabbar make it to the mountains.

Abdi escapes and goes to Ali Safa Bey for assistance. Ali Safa plans to have his secretly controlled brigand, Kalayji, ambush and kill Memed. Instead, Memed outwits Kalayji and kills him instead. Memed finds a safe place to rest in the Chichekli Valley, close to the town where Hatche is imprisoned. Memed dresses up as a poor boy and manages to see Hatche. Then, with the help of Lame Ali, Memed carries out an ambush of the police crew, bringing Hatche and her friend Iraz to a new jail. Memed, Hatche,and Iraz are constantly pursued by the police. Memed goes to a cave hideout on the Alidagh peak. For many months the three of them hide out there, and by this time Hatche is pregnant. Sgt. Asim closes in on Memed, but quietly lets him escape when he discovers that Hatche just gave birth to a son. The three fugitives move on, but in a fight with other police, Hatche is shot and killed. There is an amnesty, but Memed instead finds out how to shoot and kill Abdi.

More summaries and resources for teaching or studying Memed, My Hawk.