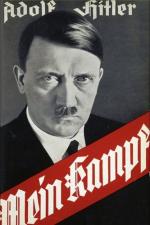 This detailed literature summary also contains Topics for Discussion and a Free Quiz on Mein Kampf by Adolf Hitler.

Mein Kampf by Adolf Hitler is a very controversial book. It causes a great deal of anger and emotionalism in different countries and some have even banned the printing of the book. This is the book in which Adolf Hitler expounds his theories and views and its copyright is held by the Bavarian Finance Ministry. The sale of the book is restricted in some countries because of the actions of Nazi Germany during World War II. Genocide becomes a word during the Hitler regime.

Mein Kampf is divided into two parts called Volumes. The first deals with Hitler's background. He intends it to be autobiographical but critics say he is more interested in portraying himself in a favorable light than he is in being factual. The second part of the book is concerned with Hitler's theories and views. The book is written while Hitler is in prison which is before he comes to national power. He basically sees himself as trying to stir up the people. He has no aspirations to national power early in his career but that soon changes as he begins to see himself as the Savior of the German people. Mein Kampf is written before he becomes a major political figure.

The first volume, or part, focuses on Hitler's youth. It is important because it explains how his values and views are formed. Much of it is used for the purposes of propaganda and he intersperses much of his story with his views on nationalism and social conditions. There is very little about the life of Hitler in this section since most of it contains his views on various topics. The Marxian influence is evident when Hitler discusses the social conditions of the day laborer. It is also obvious that Hitler's intense nationalism is a product of the end of World War I and the situation that is forced on the Europeans. Hitler's hatred of Jews is evident throughout the book but he never explains where it actually comes from. He tries to find proof in history to support his views.

The second volume is dedicated to presenting the foundations of his beliefs that form the basis for the National Socialist German Workers' Party. There is really not much of a difference between the two sections. They are both laden with propaganda. Hitler explains how the storm section comes into being, how the uniforms, insignia and flag are designed. He explains the position on trade unions, foreign policy, the federation of German states, propaganda and such things. In Hitler's views, Jewish is synonymous with Marxism and he views Marxism as the greatest threat to post-World War I Germany. He sees a strong Germany as being a necessity for the survival of the German people in the post-World War I world.

The book is a translation from the original German and the sentences are long. The whole book is so laden with propaganda that at times it is tiring for the reader. However, for those looking for insight into Hitler's character and into what National Socialism was, the book is required reading.