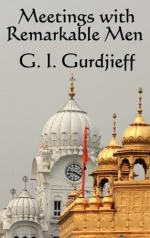 This detailed literature summary also contains Topics for Discussion and a Free Quiz on Meetings with Remarkable Men by G. I. Gurdjieff.

G. I. Gurdjieff (January 13, 1886? - October 29, 1949) explains that this book is a continuation of an earlier work, Beelzebub's Tales to His Grandson, and also a segue to a planned third work, all of which he intends to publish in order to give to the world his complete set of ideas, insights, wisdom, and directions for humankind to live better lives. His followers published this book ten years after his death.

This book is about the remarkable men that Gurdjieff has met throughout his life. Each man's story illustrates at least one major point in Gurdjieff's teaching through the Institute for the Harmonious Development of Man.

Gurdjieff's father lays the proper, according to the author, foundation for a successful man in business and life in general. Additionally, the father allows the tutoring of Gurdjieff rather than forcing him to remain in the regular schools. The idea here is that with the proper upbringing, children grow into responsible, independent, and caring adults.

Dean Borsh is Gurdjieff's first and primary tutor. The Dean is also an ordained priest who lives much more simply than other priests. He teaches Gurdjieff that humility is an important virtue when seeking the truth, and to dismiss the strange things that Gurdjieff encounters in his life. Gurdjieff still seeks answers to these mysteries, such as why psychic predictions come true. Bogachevsky, also known as Father Evlissi, reinforces Gurdjieff's curiosity about the spirit world and tells him about objective and subjective morality.

Captain Pogossian is Gurdjieff's model for the perfect businessman who also has his soul together. Pogossian at first aspires to become an ordained priest but discovers that his heart is not in it. Upon Gurdjieff's suggestion, Pogossian works for the railroad and later accompanies Gurdjieff on an expedition to Egypt. Along the way, Pogossian becomes interested in a steamship engine room. He stays on with the ship to eventually become a rich man in the steamship transportation and shipping business. The primary message is that a man can be both spiritual and material concurrently, and should also follow his heart's desire, not what parents or society desire for him.

Abram Yelov is another model for the perfect businessman, but in a different sense. Yelov's first love is of knowledge and philosophy, which happen to be found in ancient literature. He becomes very proficient with the bookseller's business and helps Gurdjieff find the volumes he desires. Yelov later becomes a successful bookstore owner in Russia but must move to North America after the Russian Revolution. He again prospers in his new home. This illustrates how following one's passion in life leads to success, and that the success does not depend upon time or place.

Prince Yuri Lubovedsky searches for a way to communicate with his wife who died while giving childbirth. He becomes a close friend of Gurdjieff, as they share many common interests. Lubovedsky ultimately fails to find a way to communicate with the dead, but he does find peace in a remote monastery. He dies there, spending his last years with Gurdjieff. The quixotic quest has value despite the impossibility of ever reaching the goal. The journey is more important than the destination.

Ekim Bey wants to seek the truth with Gurdjieff and his other friends, but he ends up using his knowledge to make money. This, according to Gurdjieff, is the wrong way to use wisdom and truth. Money should be made in the usual business ways, not by trying to sell spiritualism. This ultimately becomes a sham and is self-destructive. However, shams are a regular part of doing business the usual ways, as Gurdjieff has practiced in his businesses.

Piotr Karpenko and Gurdjieff are rivals for a young girl's attention while they are still boys. They end up risking their lives over her in a live practice artillery bombardment. Afterwards they become fast friends and vow never to do such a foolish thing again. The lesson they learn is that oftentimes competition is silly and not worth the fight. Only friendship has value over the long haul. Karpenko dies from gunshot wounds while on an expedition with Gurdjieff, which shows how quickly life can be snuffed out.

Professor Skridlov dedicates his life to seeking out ancient artifacts, whether or not the seeking brings any wisdom or truth. Upon meeting Gurdjieff and going on a particular expedition with him, the Professor discovers the deep meanings of life from a priest in a monastery. Both Skridlov and Gurdjieff's lives change during this time, taking on the depths that bring tears to Skridlov's eyes every time he sees the magnificence of creation, such as on a mountain top. Where Gurdjieff had sought this revelation all his life, Skridlov stumbles upon it. Both ways lead to the same place.

At the end of the book, Gurdjieff explains how he makes money to keep the Institute for the Harmonious Development of Man going. His students put this chapter together ten years after his death. It reveals the details of how the Institute got started, how it expanded, and much of what Gurdjieff thinks regarding business, the modern world, and also the rude American who posed the initial question that sparked the long dissertation.