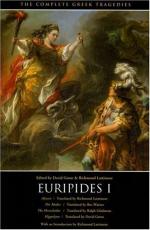 Euripides
This Study Guide consists of approximately 27 pages of chapter summaries, quotes, character analysis, themes, and more - everything you need to sharpen your knowledge of Medea.

The nurse laments the search for the Golden Fleece since it led Medea to Corinth with Jason. The Golden Fleece symbolizes the harmony of Medea and Jason’s early love and also Medea’s betrayal of her family and homeland for Jason.

Aegeus has just come from the Oracle of Phoebus when he visits Medea in Corinth, but he does not understand the Oracle’s message. This serves as a symbol of the ambiguity of the gods which plays a role later in the play when the chorus questions Zeus for allowing Medea’s acts of vengeance.

Medea sends poisoned robes to Glauce through her sons, symbolizing her treachery and plans for vengeance.

Chariot of the Sun

Medea escapes with her sons’ bodies by using the chariot from the Sun, her paternal grandfather. This symbolizes the gods’ approval, or...