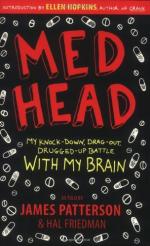 James Patterson
This Study Guide consists of approximately 35 pages of chapter summaries, quotes, character analysis, themes, and more - everything you need to sharpen your knowledge of Med Head.

This detailed literature summary also contains Topics for Discussion on Med Head: My Knock-down, Drag-out, Drugged-up Battle with My Brain by James Patterson.

Med Head is the extraordinary story of Cory Friedman's struggle to overcome debilitating behavior conditions Tourette's Syndrome, Obsessive Compulsive Disorder, and an anxiety disorder. Narrated from Cory's point of view, Med Head takes its readers on the harrowing medical journey from the onset of Cory's condition to the depths of his despair, and the miraculous disappearance of his symptoms.

Cory's first "tic" or uncontrollable body movement happens when he is four years old and he has the strange urge to twist his neck to the side while he is playing video games. He twists his neck but a few moments later, the urge returns again and again until he is twisting his neck almost constantly. An early misdiagnosis of Cory's condition put him on medication that only exacerbated his problems. Soon, he was twitching and ticcing with nearly every part of his body: his limbs, his face, his voice, etc. Some of his most exhausting tics including hopping, raising his middle fingers into the air, cursing, and throwing himself on the ground. Some of Cory's tics are so extreme that they cause him, and his surroundings, physical damage. He breaks his teeth by gnashing them, destroys his shower tiles by jumping on them, causes a car accident by pulling on the steering wheel, and tears muscles in his back by jerking side-to-side. Cory's constant ticcing affects everyone around him. His parents are exhausted by the constant strange behavior, classmates cannot concentrate on their studies when he's around, Cory's sister hides away in her bedroom to avoid annoying contact with him. Teachers call him a distraction, friends grow embarrassed of his behavior, and doctors call him a puzzle. Cory feels lost in his conditions and frustrated that no one can find a cure.

From the age of five to sixteen, Cory visits a steady stream of new doctors, each promising that their concoction of medications will be the answer to his problems. Each medication brings its own set of side-effects, from increased tics to bouts of rage to catatonic states of unconsciousness. Cory also tries a variety of behavioral therapies, none of which seem to help his increasingly troublesome behaviors. The only thing that seems to help, the only thing that makes Cory feel "normal" is alcohol. He discovers vodka's calming effect while he is in a bout of rage at the age of sixteen. Soon, he is completely dependent on alcohol to control his moods, a dangerous dependence for any individual, let alone an individual taking an assortment of anti psychotic, anti-seizure medications. Since Cory doesn't have any friends at school, his parents allow him to hang out with the wrong set of friends, other alcoholics and druggies, simply so he can have some socialization in his life. One evening, after drinking a bottle of vodka, Cory falls asleep on the couch with a lit cigarette in his mouth and nearly burns down the house. After this, his parents decide that he needs an intervention.

Med Head actually opens with the scene of Cory's parents bringing him to a mental institution trained to deal with teenaged alcoholics. After realizing that Cory would be ostracized and tormented for his other conditions, and that the hospital is set up like an old-fashioned insane asylum, they remove him from the facility against medical orders and send him on a wilderness retreat in the mountains. There. Cory learns to rely on his body to save him rather than harm him. When her returns home, he is a changed man who, for the first time in his life, accepts himself for who he truly is, flaws and all. After spending time in a state-of-the-art behavioral analysis hospital, Cory learns new techniques of managing and even subduing some of his tics. One morning, he wakes and is miraculously free of tics. It's unclear whether this newfound freedom is a result of medication, outgrowing his condition, or new forms of therapy, but in some way, the answer to that question doesn't matter. After thirteen years of suffering, Cory Friedman is finally free.

More summaries and resources for teaching or studying Med Head: My Knock-down, Drag-out, Drugged-up Battle with My Brain.