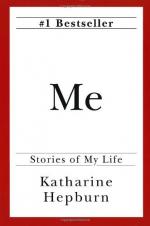 Me: Stories of My Life Summary & Study Guide

Katharine Hepburn
This Study Guide consists of approximately 29 pages of chapter summaries, quotes, character analysis, themes, and more - everything you need to sharpen your knowledge of Me.

Me: Stories of My Life Summary & Study Guide Description

Me: Stories of My Life Summary & Study Guide includes comprehensive information and analysis to help you understand the book. This study guide contains the following sections:

This detailed literature summary also contains Topics for Discussion and a Free Quiz on Me: Stories of My Life by Katharine Hepburn.

Me, Stories of My Life by Katharine Hepburn is a unique autobiography is which Ms. Hepburn seems to open up her heart and soul to everyone including herself.

Ms. Hepburn tells her life story in short bursts, taking the reader through some of the most influentially important moments in her life. The author describes the deaths of her most beloved family members, her mother, brother Tom, and the love of her life Spencer Tracy in such a way that allows an insight into the very soul of Ms. Hepburn. She reexamines her career as well as her personal relationships with the people who helped her achieve her goals. At times she makes apologies to those she feels she has wronged along her path to fame.

The book is the journey of a young girl living in Hartford with her family, leading an idyllic life and suddenly having to deal with the unexpected death of her brother. Ms. Hepburn leaves her home and family to go to college and soon after graduation starts out in the theater. Ms. Hepburn soon makes her cross into motion pictures and ultimately stardom. All along she has the love and support a very close circle of family and friends, including Ludlow Smith, Ms. Hepburn's husband. Although the two are only married a relatively short time, Luddy remained a part of Ms. Hepburn's life until his death.

Ms. Hepburn candidly discusses her famous relationships with men such as Leland Hayward and Howard Hughes. She also introduces the reader to the people she worked with throughout the years like director George Cukor and John Wayne.

Ms. Hepburn revisits most, if not all, the movies and plays she has been in over the years. She gives the reader firsthand accounts of how she gets the roles as well as memorable events that may have taken place while making the show. In the case of 'Rooster Cogburn' in which she acted with John Wayne, Ms. Hepburn gives such a moving tribute to Wayne that it makes you fall in love with him also.

Ms. Hepburn shares her twenty-seven year love affair with Spencer Tracy, including the days surrounding his death in their home in California. Ms. Hepburn seems to realize, almost as she is writing this biography, how past relationships were one-sided until she fell in love with Tracy. She also admits her feelings on the fact that Tracy never divorced his wife. Ms. Hepburn searches for answers to questions she has concerning this relationship with Tracy in a letter addressed to Tracy himself.

More summaries and resources for teaching or studying Me: Stories of My Life.

Me: Stories of My Life from BookRags. (c)2022 BookRags, Inc. All rights reserved.