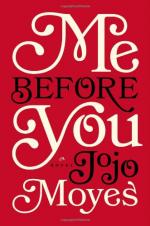 Me Before You Summary & Study Guide

Jojo Moyes
This Study Guide consists of approximately 53 pages of chapter summaries, quotes, character analysis, themes, and more - everything you need to sharpen your knowledge of Me Before You.

Me Before You Summary & Study Guide Description

Me Before You Summary & Study Guide includes comprehensive information and analysis to help you understand the book. This study guide contains the following sections:

This detailed literature summary also contains Topics for Discussion on Me Before You by Jojo Moyes.

"Me Before You" by Jojo Moyes is a novel about a vibrant and energetic young man who lives in the United Kingdom and has most of his life still ahead of him. He lives it with enthusiasm, both in business and in his personal time, climbing Mount Kilimanjaro, scaling the cliffs in Yosemite, California, and trekking through exotic locations like Kenya, China, and even recreating in Mauritius.

Will Traynor is a go-getter in every sense of the word until a motorcycle hits him as he is about to get into a taxi. The result leaves him a quadraplegic. For two years, he endures physiotherapy, uncounted doctors visits, bouts of pneumonia and constant pain. He stoically puts up with the indignities that surround his new life in which every action requires someone else's help. He loses much more than his mobility. He also loses his home, unable to stay there as it is not wheelchair accessible. He loses his girlfriend, and even though part of that is because he shuts her out of his pain filled, and chair locked life, he still misses her. Finally, resigned to the new circumstances of his life, he tells his parents that he would like to schedule an appointment with Dignitas in Switzerland to enlist the help of a specialist to put an end to his non-stop suffering. At first horrified, his parents fight his decision, but when Will tries to take his own life by making use of a nail sticking out and scraping it across his wrists until they are in ribbons, they reluctantly relent, but only on the condition that he give them an addition six months. He agrees.

Soon after, his mother hires a second caregiver to help with Will when his primary caregiver, Nathan is not there. Louisa Clark is recently unemployed, twenty six years old, and has no experience in this field, but she is a pleasant and bubbly human being with a positive attitude, and Camilla Traynor is praying that she will get through to her son when no one else has been able. Of course, she has no idea that her primary job description is to keep him from attempting suicide again, in the beginning, but she inadvertently overhears a conversation that reveals the truth and devastates her. In fact, the news is so disturbing to her that she gives her notice effective immediately. Camilla begs her to return, and she does but only under one condition. She asks that they support whatever she is willing to attempt to do to change Will's mind, providing it doesn't adversely affect his health. The Traynor's agree. What follows is a learning curve for Louisa as she discovers how difficult it is to do most everything as a quadraplegic, and determined to be successful, she soldiers on, taking Will on short outings at first, and culminating in a paradise vacation to Mauritius where she confesses she loves him and tells him that they can have a good life together. It is a job that almost appears to take more than it gives, and although she wouldn't trade knowing Will for anything else, Louisa loses her long standing boyfriend, and is without a job at the end of it. Still, what she gains is an eye opener as well, and she comes away from her experience stronger, more confident, and more adventurous.

More summaries and resources for teaching or studying Me Before You.

Me Before You from Gale. ©2005-2006 Thomson Gale, a part of the Thomson Corporation. All rights reserved.