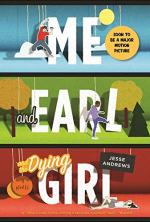 Me and Earl and the Dying Girl Summary & Study Guide

Jesse Andrews
This Study Guide consists of approximately 48 pages of chapter summaries, quotes, character analysis, themes, and more - everything you need to sharpen your knowledge of Me and Earl and the Dying Girl.

Me and Earl and the Dying Girl Summary & Study Guide Description

Me and Earl and the Dying Girl Summary & Study Guide includes comprehensive information and analysis to help you understand the book. This study guide contains the following sections:

This detailed literature summary also contains Quotes and a Free Quiz on Me and Earl and the Dying Girl by Jesse Andrews.

Greg Gaines’ main goal in life is to avoid making any friends at high school. By avoiding making any friends, Greg reasons, he can avoid being criticized, judged, or disliked. Greg is so insecure that it is stopping him from being truly alive: he avoids life rather than participating in it. Greg’s only friend is Earl Jackson, another senior at his high school. The boys share a love of cinema and together they write and direct their own short films inspired by their favorite movies. Although they take pleasure in making the films together they refuse to ever show the finished product to anyone else. Only two copies of each Gaines/Jackson DVD exist – one for Greg and one for Earl – and no one else has ever seen any of their films.

Greg’s life started to change when his mom insisted that he get back in touch with a girl called Rachel who he attended Hebrew school with in the sixth grade. Rachel had been diagnosed with leukemia and both Greg’s mom and Rachel’s mom thought it would cheer Rachel up to spend some time with Greg. Greg was initially reluctant to contact Rachel because the plan went against everything he was trying to achieve: he wanted to avoid making friends, not reconnect with people from his past. But gradually, Greg came to realize how much he enjoyed spending time with Rachel and their friendship blossomed. Eventually, Greg introduced Rachel to Earl - his only other friend - and after a bumpy start they became friends too. When Rachel expressed an interest in the Gaines/Jackson films Earl offered to show her the DVDs despite protests from Greg. Rachel loved the DVDs and watched them over and over again when she was in hospital having chemotherapy. Another student from their high school, Madison Hartner, found out how much Rachel enjoyed the Gaines/Jackson films and suggested to Greg that they should make a film especially for Rachel.

Greg agreed to the plan but quickly regretted it when he and Earl struggled to come up with ideas about what the film should be. The film began to take over Greg’s life and he started to fall behind at school, causing his teachers to worry that he would ruin his chances of getting into a good college. What was worse, from Greg’s perspective, was that everyone at school knew that he and Earl were making a film for Rachel. Suddenly everyone knew who he was and Greg was no longer able to live the kind of anonymous existence that he craved.

After multiple failed attempts Greg and Earl finally finished “Rachel the Film”. Unbeknownst to them, Rachel’s mom had found a copy of the film and had shown it to Greg’s mom. The two women were so touched by what Greg and Earl had done that they decided everyone should get the chance to see the film. Without telling the boys, the Principal arranged for a special screening of “Rachel the Film” for the entire school. This was a nightmare for Greg, who never wanted to share any of their films with anyone. Most of the students thought that Greg and Earl’s film was weird, but Rachel told them that she enjoyed it. She told Greg and Earl that she wanted both of them to apply to go to Film School. Shortly after the screening of their film for her, Rachel died.

In the Epilogue, Greg reveals that he is writing the book in order to explain to the admissions board that his grief over Rachel’s death is the reason that he failed so many classes in his first year of college. Through the process of writing the book, Greg realizes that he doesn’t want to go back to college. He wants to apply to Film School, just like Rachel suggested he should. Writing about what happened to him has provided a kind of therapy, and by the end of the Epilogue Greg is no longer afraid to go out into the world and be the person he really is. Although Greg protests that he didn’t learn any important life lessons as a result of the events in the novel, in fact, Rachel’s death has taught him the value of being alive.

More summaries and resources for teaching or studying Me and Earl and the Dying Girl.

Me and Earl and the Dying Girl from BookRags. (c)2022 BookRags, Inc. All rights reserved.