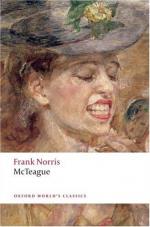 Frank Norris
This Study Guide consists of approximately 50 pages of chapter summaries, quotes, character analysis, themes, and more - everything you need to sharpen your knowledge of McTeague.

Trina has been reduced to the position of a cleaning lady at a kindergarten. Despite having the five thousand dollars still invested in her uncle's toy shop, Trina refuses to spend it. She still denies herself simple things like heat and light so that she can save a dollar or two. Notwithstanding all that she has been through at the hands of her husband, Trina is still a miser.

Trina is still devastated, not by her husband's leaving her, but by the fact that he took with him all of her savings. In an effort to make herself feel better, Trina goes to her uncle's store and withdraws the exact amount her husband has stolen. This does not satisfy her, however, and she withdraws more and more, eventually asking for a cheque in the entire amount.

One night, while she is sleeping in...

(read more from the Chapter 19 Summary)

More summaries and resources for teaching or studying McTeague: A Story of San Francisco.