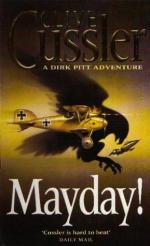 Mayday by Clive Cussler is a techno-thriller set in the beautiful location of the Aegean Sea off the coast of the island, Thasos, sixteen miles across the water from Greek Macedonia. The book starts out with a very exciting assault on the American Air Force field on the island from an antiquated, bright yellow World War I biplane. The biplane causes a great amount of damage to the aircraft on the ground, prompting a Mayday call that is intercepted by Dirk Pitt and his friend Al Giordino. Despite disbelieving that the airfield is really being attacked by a biplane, they bring their Catalina PBY into the fray, and this is where the story begins. Their presence on Thasos Island is a direct result of the suspected sabotage that the First Attempt, a NUMA boat, is experiencing in their search for a prehistoric fish. The First Attempt is the precipitating factor in the drama of the story, Mayday. Her presence in the Aegean Sea off the coast of Thasos causes trouble for a resident of the island, Bruno von Till, a shipping merchant who leads a secret life as a drug smuggler and human trafficker. He fears discovery of his smuggling operation from the divers on board the First Attempt, and his air attack on Brady Field is designed to simply have the First Attempt removed from the vicinity. His calculations did not include Dirk Pitt being called into action. Von Till's activities are about to be uncovered and exposed to the world.

After the successful air campaign that saves the lives of the men at the airfield as well as the remainder of the aircraft, Pitt and Giordino take up quarters on the air base because the facilities aboard First Attempt are cramped. Pitt takes a very early morning swim in the ocean and meets Teri von Till. After a romantic interlude on the beach, she invites Pitt, believing him to be a base garbage collector, home to her uncle's villa for dinner. Dinner goes very well until they are finished eating. Von Till determines that Major Pitt is actually a very dangerous man to have in his home and sends him through the Labyrinth, with his vicious white German Shepherd to ensure his demise. Pitt, however, made of much sterner stuff, kills the dog and despite grave injury makes his way out of the labyrinth (a feat no one has ever accomplished before). He arrives back at the boat in time to prevent loss of life for the crew of scientists aboard the boat.

The events of the previous twenty-four hours cause Dirk to believe that something else is really going on, and he realizes that von Till does not want NUMA's boat to remain in the vicinity. Following his deductions, he determines that von Till is up to something nefarious so, joining forces with Z, Captain Zeno, and Darius, discovers that von Till is a world-class smuggler of heroin and sets about figuring out the mystery of how von Till has never been caught.

His discoveries lead him to the Queen Artemisia, one of von Till's merchant vessels, that appears to be almost a phantom boat. After an overnight search of the vessel, Pitt cannot find where the heroin is hidden and then realizes that the heroin is not on board but attached to the bottom of the boat in a submarine. Once he makes that determination, Pitt sets out to discover von Till's hidden submarine caves beneath the cliffs below von Till's villa. The discovery of the caves proves Pitt's theory, and fortunately they are rescued in enough time to prevent any deaths to the scientific crew, and Pitt only suffers a flesh wound through his leg.

Dirk is satisfied that he has stopped a drug smuggler and also unmasks von Till, proving him to be an ex-Nazi war criminal, who is still wanted for his war crimes of thousands of deaths. His greatest satisfaction comes when he realizes that Teri is really not von Till's niece, and also gaining

von Till's wonderful classic car the 1936 Maybach-Zeppelin back to the states for his own personal use.