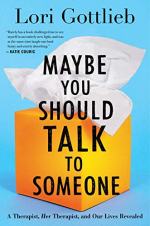 Maybe You Should Talk to Someone Summary & Study Guide

Lori Gottlieb
This Study Guide consists of approximately 102 pages of chapter summaries, quotes, character analysis, themes, and more - everything you need to sharpen your knowledge of Maybe You Should Talk to Someone.

Maybe You Should Talk to Someone Summary & Study Guide Description

Maybe You Should Talk to Someone Summary & Study Guide includes comprehensive information and analysis to help you understand the book. This study guide contains the following sections:

This detailed literature summary also contains Topics for Discussion on Maybe You Should Talk to Someone by Lori Gottlieb.

The following version of this book was used to create the study guide: Gottlieb, Lori. Maybe You Should Talk to Someone. Houghton Mifflin Harcourt, 2019.

In this nonfiction work, psychotherapist Lori Gottlieb chronicles several months of therapy with a small handful of patients alongside her own journey as a therapist and as a patient. When the man she was going to marry suddenly breaks up with her, Lori finds herself on the couch of an eccentric, avant-garde therapist, Wendell, who helps her rediscover her own vulnerability, self-compassion, and to edit the self-narrative she did not realize she had been telling herself. As she travels deeper into her psyche with Wendell, she enters uncomfortable emotional terrain, including grief, loss, anxiety concern a mysterious illness that doctors have been unable to diagnose, fear towards being halfway done with her life, and resentment toward the "happiness book" she is supposed to be writing.

At the same time she goes on this therapeutic journey with Wendell, Gottlieb takes the reader into her own therapy office so they can follow along as she works with four patients: John, a narcissistic, phone-addicted television writer, Rita, an elderly woman who plans to commit suicide on her seventieth birthday, Julie, a recently honeymooned woman in her forties dying of cancer, and Charlotte, a lonely millennial struggling with alcoholism and toxic relationships with men. Gottlieb interweaves her sessions with these patients, her sessions with Wendell, and passages from her own life as she switched from a career in Hollywood to medical school, to training for being a psychotherapist, to create a compelling, cerebral, and deeply moving philosophical work on the nature of growth.

Gottlieb captures a fundamental but often ignored truth--that humans grow alongside each other. By seeing others grow and work with similar challenges and issues, as they struggle and fail, we become more self-aware and work to become more open and vulnerable too, we too can find the courage to open ourselves up to the world and change. Gottlieb's work is a beautiful exploration of just how collaborative growth is--it is individual, but at the same time, communal. By placing herself in a position of vulnerability and taking us into the therapy room with her patients and her own therapist, she allows us to witness her and her patients getting on the right track, to demonstrate how change is a universal struggle.

More summaries and resources for teaching or studying Maybe You Should Talk to Someone.

Maybe You Should Talk to Someone from BookRags. (c)2022 BookRags, Inc. All rights reserved.