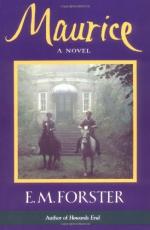 Maurice by E.M. Forester is a tale of a young man struggling with his sexual orientation in a time when little was known or understood about homosexuality. Maurice feels as though he must hide his true character from everyone, even those closest to him, for fear that they will not understand or that he will be placed in prison. As Maurice grows older, he finds a small group of people who understand him, including a young man who pledges him his love. However, these others outgrow their feelings, but Maurice cannot. It is a struggle that still rings true today, causing modern readers to root for a man who is struggling with the basic crisis all people face, the discovery of who he really is.

Maurice is given a lecture on sex as a fourteen year old boy. As a result of this lecture Maurice begins to realize there is something different about him. When Maurice goes to high school and hears other boys talk about girls, he realizes that his thoughts are not only different, but something to hide. Maurice pretends to be like the other boys while in the back of his mind he desires not women, but men. It is a struggle for Maurice to keep his thoughts to himself and it causes him to disengage from the people around him in fear that they will learn what he really is.

Maurice goes to Cambridge to further his education. While there, Maurice meets a young man who, unlike Maurice, feels free to speak his mind. Maurice wants to befriend this young man because he feels that with him he too can be the person he really is rather than the fake persona he has developed over the years. When Maurice goes to this man's room, however, he finds another young man there. Maurice and this man talk and soon Maurice discovers in him a kindred spirit. Maurice and Clive Durham become close friends. Shortly before a school vacation, Clive suggests to Maurice that he read a book about the Ancient Greeks. Maurice reads the book and discovers it speaks about homosexuality with openness. Maurice has never experienced this type of openness before and is excited to discuss the book with Clive. When Clive learns that Maurice read the book and embraced its message, he tells Maurice that he loves him.

Maurice is shocked by Clive's announcement. Maurice reacts as society would have him do, shunning Clive. Clive is heartbroken and refuses to speak with Maurice again. Maurice finally cannot hide his true feelings anymore and goes to Clive to apologize. Clive is so angry and hurt that he refuses Maurice's apology. Maurice hangs around outside Clive's room all night until he hears Clive call his name in his sleep. Maurice goes into the room and Clive welcomes him. For three years Clive and Maurice have a close relationship. However, due to his religious upbringing, Clive is reluctant to consummate the relationship. Maurice is content with this as long as Clive wants to be with him. Maurice is of the opinion that homosexuality is so rare and morally wrong that he is lucky to have found one man willing to share anything with him.

Maurice is kicked out of school shortly after his affair with Clive begins. Maurice returns home and takes a position with his father's old stock broker firm. Clive finishes his education and becomes a lawyer. Maurice and Clive spend a great deal of time together, with Maurice often spending Wednesday nights at Clive's city apartment. The two families of the two men also become acquainted. After three years, Clive becomes ill with the flu. During this illness, Clive begins to believe he has been healed of his homosexual desires. Clive becomes distant with Maurice, leaving Maurice to believe that the illness has caused a change in personality. Clive travels to Greece on holiday and while he is gone sends Maurice a letter telling him that their relation must end. Maurice refuses to accept this.

When Clive returns home, he tells Maurice that although he wants to remain friends, he no longer feels a sexual connection to Maurice. Clive wants to get married to a woman. Maurice is heartbroken. However, Maurice realizes he must remain friends with Clive in order to protect himself from discovery. Clive's desertion causes Maurice to desire a cure for his homosexual thoughts. Maurice runs into an old college friend and accepts from him the name of a man who is rumored to have cured men of homosexual desires. Maurice sets up an appointment with this man while visiting with Clive at his country estate.

Maurice's desire to find a cure increases when Clive offers Maurice one last kiss. Maurice desperately wants to marry a woman to end the deep loneliness and heartache he feels. The first meeting with Lasker Jones, the hypnotist, goes well. That night, Maurice is contemplating his future when one of Clive's employees sneaks into his room. Maurice lies with this man, Scudder, and finds himself content for the first time. Maurice is ashamed of his feelings, however, and rushes away from Clive's home the next day in order to avoid Scudder. Scudder is heartbroken by Maurice's actions and begins to send him letters that frighten Maurice into believing Scudder intends to call the police on him.

Maurice arranges to meet Scudder in London. After a short conversation, the two men go to a hotel where they spend the night. Maurice believes he has fallen in love with Scudder. Maurice begs Scudder to run away with him rather than move to Argentina where he is planning to go. Scudder at first refuses. However, Scudder decides at the last moment to stay with Maurice. Maurice goes to Clive and tells him about his love for Scudder and tells him that he plans to disappear to a place where he and Scudder can live happily together. Clive disapproves, but Maurice does not care.