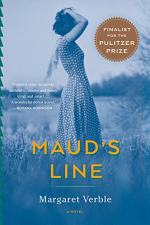 Related Topics
When Two Feathers Fell From the Sky

Margaret Verble
This Study Guide consists of approximately 54 pages of chapter summaries, quotes, character analysis, themes, and more - everything you need to sharpen your knowledge of Maud's Line.

The following version of the book was used to create this guide: Verble, Margaret. Maud’s Line. First Mariner Book, 2015.

Maud’s Line, by Margaret Verble, is the story of a young Cherokee woman who lives on Indian allotment land in Oklahoma and yearns for a better life. Her life in Oklahoma is filled with hardship and violence, but also with the love of her family. When a handsome white man comes to town, Maud learns what is really important in life.

As the book begins, Maud and her brother Lovely are working in the garden when they hear their cow bawling in the field. They discover that someone has taken an axe to the cow’s back and left it to die. When Maud tells her extended family of the event, they agree that the Mount brothers are responsible for the cruel act. Shortly after the cow is killed, a handsome stranger, who comes to town peddling his wares, enters Maud’s life. Maud falls instantly in love with the educated and, to her eyes, worldly man named Booker. One night the local schoolhouse catches fire and Booker is accused of arson simply because he is a stranger. As a result, he is forced to stay in the area and he and Maud begin a relationship. On the night of the fire, Maud’s father and uncle go over to the Mounts to kill some of their pigs in retaliation for the cow. In turn, the Mounts leave a dead dog on Maud’s kitchen table. When Lovely buries the dog and then becomes ill, the family believes he has been exposed to rabies.

Maud continues to see Booker, but when the Mounts are found murdered and Mustard is suspected of committing the crime, Booker leaves town to think about whether or not he can handle Maud’s way of life. Unfortunately, the letter he leaves for Maud gets ruined in the rain and she does not know why he has left, so she has no idea if he will come back. Meanwhile, Mustard leaves town to avoid arrest and Maud is left to care for their home and Lovely in his absence.

While Booker is gone, Maud begins a sexual relationship with Billy, an Indian boy she has known for years. However, she is already pregnant with Booker’s baby. Maud tries to get her aunts to help her get rid of the baby, but they refuse. She then decides that Billy would make a good father, so she plans to pass the baby off as his, all the while still longing for Booker to return. Lovely begins to act strangely, as though he is mentally ill. He sees relatives who are long dead and hears voices that are not there. The entire family is concerned about him, but there seems to be little they can do. Lovely’s girlfriend breaks up with him due to his strange behaviour. Lovely is aware that something is not right and fears he is going mad. This leads him to take his own life.

With Lovely gone and no sign of Booker returning, Maud becomes depressed at the thought caring for a baby with Billy. Eventually, her family becomes concerned for her. Her great-uncle’s wife brings her a horse to ride saying that it might help her to dislodge the unborn baby. However, the horse is a gentle creature and the baby does not abort. Instead, Maud finds herself settled by her daily rides and her mood evens out. She becomes resigned to the birth of the baby and life with Billy.

Later, Maud learns that her father did, in fact, shoot Claude Mount, but that Claude himself shot John by accident. Her father briefly returns to town to tell Ryde that he is going to seek out the outlaw Pretty Boy Floyd to join his gang. When Booker learns of Maud’s pregnancy through Mr. Singer, he returns for Maud. He convinces her to marry him and leave her life behind for life in the city. Maud concludes that what she really wants out of life is to live in a place where someone loves her, so she leaves with Booker and signs her allotment land over to Billy.

More summaries and resources for teaching or studying Maud's Line.