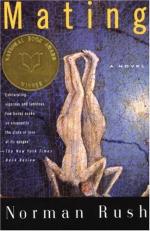 Norman Rush
This Study Guide consists of approximately 57 pages of chapter summaries, quotes, character analysis, themes, and more - everything you need to sharpen your knowledge of Mating.

This detailed literature summary also contains Topics for Discussion and a Free Quiz on Mating by Norman Rush.

In 1980, in Botswana, the narrator, an American anthropologist and doctoral candidate, emerges from the African bush after an 18-month failed attempt to gather data for her thesis. She is exhausted, undernourished, and seriously disillusioned. She wants nothing more than to at least temporarily fall back into the more luxurious, self-indulgent ways of white society in Africa and heads to Botswana's capital city, Gaborone. Hoping for rest, relaxation, and romance, the 32-year-old single woman begins to tell her story, one that will reveal almost everything about her to the reader, except for her name, which is never given.

In Gaborone, the narrator quickly finds a niche within the conglomeration of whites living there: diplomats, spies, scientists, missionaries and politicos from around the world and the Dutch-descent Boer settlers who still control much of Botswana's economic and political structure. She finds herself invited to housesit so she has a place to stay, parties to go to, and several men to dally with. There is Giles, the vain, handsome, but talented photographer, who takes her to an assignment in Victoria Falls, although their relationship never really takes off, emotionally or sexually. She then finds herself more seriously attracted to Martin Wade, an exiled South African living under an assumed name. Wade is an army deserter, a sympathizer with native African independence, somehow involved as an anti-South African operant. Although she admires Martin's sense of justice and air of mystery, he does not lead a life that will really allow him to partner with anyone and they soon part.

The narrator then moves on to a middle-aged British spy known only as "Z," who suffers from agonizing back pain. She keeps him attached to her by ministering to his back, which brings him relief from his constant pain. He rewards her with the information that Nelson Denoon is visiting Gaborone. Nelson is a brilliant intellectual known for pioneering work on socioeconomic projects, which puts power back into the hands of native people. The narrator knows his work well as it has made him an academic celebrity. She is determined to meet him and has "Z" take her to a party where Denoon will be present.

A strange encounter at the party with Nelson's soon-to-be ex-wife leads to the narrator meeting Nelson and hearing him debate black and white politicians. She is deeply intrigued. Later, she tracks him down in Gaborone, trying to make a place for herself in his newest top-secret project, the village of Tsau. No one knows its exact location other than donors and supporters with visitors not yet welcome. The intention is to ward off outside influences until the new village is socially and economically strong. Nelson and the narrator have an interesting conversation and seem to connect but he tells her there is no place for her or anyone else in Tsau. She, however, is even more determined to know more about this man who she finds increasingly alluring. After finding out from his wife Grace where the village is located the narrator executes a daring plan, going out into the Kalahari Desert, and walking to Tsau by herself a harrowing experience that almost claims her life.

Once in Tsau, the narrator finds a prospering village with a much higher quality of life than that of most African villages. More surprisingly, Tsau is succeeding by turning African tradition on its head. All its charter members are women with the land deeded to them inheritable only by another female. Although there are a handful of men in the village the women are in charge, ruling themselves under a governmental body called the Mother Committee. Nelson plans to one day open Tsau to whoever cares to participate but first he wants the women who are on the bottom rung of African society to become comfortable wielding power.

Nelson seems happy to see the narrator again although he asks her to keep their previous meeting a secret. As she begins to fit into life in the village she finds allies in some of the other women and in Nelson a man like none she has ever known. When, after a long and awkward courtship, he invites her to move into his house she accepts and their romance begins in earnest.

Although Nelson and the narrator are highly intellectual and unusual people they suffer the same insecurities and fear of intimacy faced by any couple. Their love grows only to be sorely tested as tensions in Tsau grow from an internal assault by a small group of residents opposed to Nelson's continued role in the village. The narrator who has always feared giving up her independence for the approval of a man becomes more obsessed with her yearning for a permanent place in Nelson's life. He in turn becomes more worried and attached to the outcome of his work, the village of Tsau. When a series of events forces Nelson out into the desert in an attempt to save Tsau he is lost for days and almost dies. To the narrator's enormous relief he is returned alive but she soon finds he is no longer the passionate, argumentative man she fell in love with. Nelson had a metaphysical experience during his ordeal in the desert and is now in an unchanging state of bliss and acceptance. Nothing seems to matter to him one way or the other including his relationship with the narrator.

Unable to reach him as she once did and convinced he is psychologically damaged, the heartbroken narrator takes him to Gaborone for treatment but none of the experts she consults thinks he has a problem. The narrator cooks up a scheme to fix Nelson up with a beautiful young woman hoping to force him to make a choice. Her plan is successful and believing he has chosen someone else she flees Africa returning to her life and academic pursuits in America.

The narrator cannot, however, forget Nelson or find anyone or anything that begins to fill the space in her heart where he resides. When she receives a mysterious message indicating there may be someone in Tsau who thinks she should return she finds herself with a difficult decision to make. Should she remain in the United States and continue her life as she always planned or return to the scene of the most important - and disastrous - love of her life? Given the sketchiness of the information she has to go on the narrator is tormented by not knowing what has become of Nelson or whether there is still a chance for their relationship. In the last lines of the book she decides to return to Africa although to what neither she nor the reader has any idea. The only thing certain is that the love she feels for Nelson is stronger than any distance or obstacle she can put between them.

More summaries and resources for teaching or studying Mating.