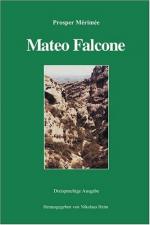 Merimee's story "Colomba," like "Mateo Falcone," features a Corsican setting; it can also be found in Merimee's collection Mosaique.

Merimee's story "The Taking of the Redoubt," also in Mosaique, is a study of the violence of war, which Merimee considers different from the violence associated with feuds or criminality.

Jean-Jacques Rousseau's Essay on the Origin of Inequality among Men (1754) maintains that civilization is corrupt and full of injustice, whereas primitive culture is "naturally just." Since "Mateo Falcone" can be read as a riposte to Rousseau's popular theory of savage nobility, Part I of the Essay makes good comparative reading.

Jorge Luis Borges's story "The South" concerns the fate of a civilized, sophisticated librarian from Buenos Aires who journeys into the southern provinces of Argentina hoping to explore what seems to him to be the romantic life of gauchos and other...