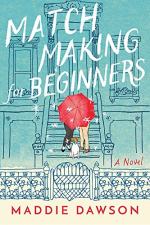 Maddie Dawson
This Study Guide consists of approximately 69 pages of chapter summaries, quotes, character analysis, themes, and more - everything you need to sharpen your knowledge of Matchmaking For Beginners.

This detailed literature summary also contains Quotes and a Free Quiz on Matchmaking For Beginners by Maddie Dawson.

The following version of the novel was used to create this study guide: Dawson, Maddie. Matchmaking for Beginners. Lake Union Publishing, June 1, 2018. Kindle.

In the novel Matchmaking for Beginners by Maddie Dawson, when the eccentric Blix Holliday sees Marnie MacGraw the first time, she believes she has met her spiritual daughter. Blix has come to her great niece’s after Christmas tea only as a chance to see her relatives for the last time before she dies. When she spots Marnie, her great-nephew Noah’s fiancée, Blix knows that she was supposed to come to the party in order to meet her. Blix, a self-styled matchmaker, decides that Marnie is the one who should take over her house in Brooklyn as well as the care of the misfits who live there.

When Blix met Marnie, she recognized right away that she and Marnie had a similar ability to sense when people were supposed to be together. Sadly, Blix did not think that Marnie’s relationship with Noah was supposed to be. Blix’s feeling was right. Noah was more than an hour late to the wedding. Then, he told Marnie he could not marry her. Thinking Noah was having a panic attack, Marnie convinced him to go through with the ceremony with the promise that they could get a divorce later if it did not work out. On their honeymoon, Noah told Marnie he wanted no part of marriage.

In California where Marnie had lived with Noah, Marnie had a sort of emotional breakdown after she and Noah were divorced. She was told after she came to work wearing her bathrobe and slippers, and cut up her wedding dress so each of her students could have a piece, that she would not be allowed to return. Marnie’s parents learned what had happened and moved her back to her hometown in Florida.

In Florida, Marnie felt as if she were getting back on her feet. She bonded with her sister, Natalie and began dating Jeremy, her boyfriend from high school. Quickly, they decided to marry. Marnie felt she had finally found her happy, normal life when she got a letter from a lawyer’s office informing her that Blix had bequeathed Marnie her house. When Marnie arrived to take charge of the house she learned not only that Noah was staying there and believed that his aunt would be leaving the house to him, but also that Blix had stipulated that Marnie had to live in the house at least three months before she could sell it.

Marnie spends her time in Brooklyn getting to know the people who live in Blix’s house and working at a part-time job in a flower shop. Sammy, the son of Jessica and Andrew, a couple who is divorced because Andrew cheated on his wife, enlists Marnie to find a spell to get his parents back together. Lola, who lives next door to Marnie, is seeing William, her late husband’s best friend, but swears there is nothing romantic about their relationship. Lola blames Marnie when William proposes to her. Even though Lola turns him down, William tells Marnie that he plans to woo Lola until she finally agrees to marry him.

Marnie also strikes up a tentative friendship with Patrick, a man who lives in the basement apartment. Patrick rarely leaves the house because a gas explosion disfigured his face and hands. Patrick finally tells Marnie that the explosion in which he was burned so badly killed Anneliese, the woman he loved. He wished that he had died in that explosion as well.

Marnie’s story climaxes when she decides to throw a Thanksgiving party for the people with whom she lives. She does not know that Jeremy has arranged to come to Brooklyn as a surprise. He is the one who is surprised when he arrives to discover that she has been living with Noah the entire time. Marnie is so shocked to see Jeremy that she drops the turkey she is taking from the oven and slips in the grease, hitting her head on a table. Jeremy leaves, devastated. When things calm down, Patrick insists that Marnie stay with him that night because she has a head injury. They sleep in his bed together. In the morning, Marne realizes how much she loves Patrick.

Unfortunately, Patrick has plans to move to Wyoming and live with his sister. There is a freak snowstorm on the day that he is supposed to move. Marnie and Sammy take Bedford, Marnie’s dog, to the park to go sledding. Bedford escapes and goes back to the house. A car hits him. Patrick hears the car hit Bedford. Patrick goes outside, which he rarely does because people stare at him. He takes the dog to the vet. Marnie is excited because Patrick has faced his fear for her. He tells her that they need to introduce her dog to his cat if they plan to live together. Marnie decides to stay in Brooklyn. This is probably what Blix had intended for Marnie to do from the beginning

More summaries and resources for teaching or studying Matchmaking For Beginners.