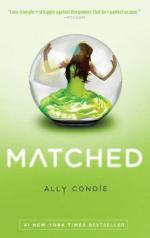 Ally Condie
This Study Guide consists of approximately 38 pages of chapter summaries, quotes, character analysis, themes, and more - everything you need to sharpen your knowledge of Matched.

This detailed literature summary also contains Topics for Discussion and a Free Quiz on Matched by Ally Condie.

In "Matched" by Ally Condie, Cassia lives in a world where Society has defined rules and events. She is challenged by her grandfather to open her eyes to see beyond what is generally considered acceptable. When she falls in love with a young man who is outside of Society's approval, she begins to understand what her grandfather is talking about.

Cassia and her family arrive at City Hall for a special celebration. She is going to find out who she is supposed to spend the rest of her life with - her Match. Cassia's Match is in the room instead of in another City Hall, which is very unusual. It's her best friend, Xander.

She knows nearly everything about Xander and is curious to see what Society wants her to know about him so she looks at his microcard. She sees another face on the card and begins to wonder who her true Match is. Cassia finds out that the other male on the card, Ky, is an Aberration who shouldn't be Matched with anyone. She knows him because he is another friend of hers.

Shortly after the Matching Banquet, Cassia attends the Final Banquet for her beloved grandfather. He has samples taken so he can be brought back when science advances. Grandfather gives Cassia a secret letter that he thinks she will appreciate someday, and he encourages her to really look into what's happening in her life and her world.

She and Ky begin to get to know each other better and Cassia keeps the truth of her attraction from everyone, including her parents and Xander. Both Ky and Cassia take risks to help each other. She teaches him contraband poetry and hides his artifact when the Officials come through to take artifacts away and he teaches her how to write in cursive.

Cassia's father gets in trouble with Society because he has lost his father's samples. Her mother has trouble at work and has to keep leaving to go on trips. Cassia is in trouble herself as her relationship with Ky comes to the Official's attention. If she doesn't shape up, it will affect her future job placement. Cassia is one of the best Sorters around, and she is in the final testing phase for her job. As a final task, she has to sort workers. The best workers will be placed elsewhere, and the others stay in this job that shortens their lives. Ky is in the middle. She places him with the better group even though she doesn't know if it will take him away from her. She does this to save his life.

Ky is taken away from his home. He is sent to the Outer Provinces to fight. Cassia knows this is basically a death sentence. She is determined to find him. Society makes everyone take a tablet to forget the situation, but she refuses to take it. She wants to remember him even if it is painful.

Cassia's family is relocated due to her mother's work decisions. On the way out, Cassia's parents and Xander offer her support in finding Ky. She is sent to a work area close to the Outer Provinces, and she is determined to find Ky someday.

More summaries and resources for teaching or studying Matched.