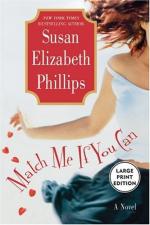 Match Me If You Can Summary & Study Guide

Susan Elizabeth Phillips
This Study Guide consists of approximately 61 pages of chapter summaries, quotes, character analysis, themes, and more - everything you need to sharpen your knowledge of Match Me If You Can.

Match Me If You Can Summary & Study Guide Description

Match Me If You Can Summary & Study Guide includes comprehensive information and analysis to help you understand the book. This study guide contains the following sections:

This detailed literature summary also contains Topics for Discussion on Match Me If You Can by Susan Elizabeth Phillips.

Match Me If You Can by Susan Elizabeth Phillips is a romance featuring a feisty, young woman, Annabelle Granger, who wants to run her own business. When she inherits her grandmother's matchmaking business, she talks her friend, Molly, into setting an appointment with Heath. Heath, 'the Python' Champion, is a successful sports agent who has decided that he needs a wife. Heath grew up in a poor trailer court and wants a trophy wife. He has an ideal fantasy of a woman that he wants Annabelle to find.

Annabelle has competition. Portia Powers is also hunting for a wife for Heath. Powers is just like her name. She is a powerhouse who never puts a wrong foot forward. Annabelle seems to find her feet in all types of situations that do not present well as a powerful business woman. Powers' clients are names. Annabelle's clients see their names on Social Security checks.

Heath has a sidekick who will become his full-fledged partner. Bodie looks like he belongs to a biker club and is seen as Heath's bodyguard. Powers spies on Heath's meeting with Annabelle's client's introduction to Heath and is caught by Bodie. Powers shows her snobbery to Bodie but can't seem to stay away from him. Bodie becomes her dirty little secret.

Annabelle and Heath are attracted to each other but will not admit it. Heath continues to meet women who are never right for him. Annabelle says what she thinks, and she and Heath spar.

Heath takes Annabelle with him when he has meetings. Bodie drives. Bodie likes Annabelle and sees the attraction long before Heath will admit it.

Through one situation or another Annabelle becomes acquainted with many of the football league stars and charms them in a homelike way. Heath comes to her when he is tired. Heath also has a longstanding grudge with the head of one of teams, the Stars. Heath tries to use Annabelle's friendship with the lady to make up the long ago disagreement. Finally through a number of crazy situations, Heath has enough. He calls Powers and Annabelle into his office to tell them each that he will meet one more client from each matchmaking agency.

Annabelle introduces Heath to a woman who appears perfect for him. She doesn't make a wrong move. She knows people and has sophistication which Heath enjoys. Everyone but Bodie see that they look very good together. Bodie sees that Heath never relaxes with her. On the night he had decided to ask Delaney to marry him, he gets a call from Annabelle who has too many big footballs players in her house. When Delaney goes to the party with Heath and sees his real life up close and personal, she and Heath both know that they don't belong together.

Heath and Annabelle have a falling out. Annabelle invites the MVP quarterback of the Stars to a birthday dinner with her parents. Heath manages to take over the invitation and learns that Annabelle actually was a debutante and is "old money." He has already decided to marry her but hasn't asked her yet. Unfortunately, he tries it in front of her very successful family. She doesn't hear "I love you" and refuses. She disappears.

Heath learns exactly how much he loves Annabelle. He has never trusted love since he had seen too many of his father's women come and go. It takes Powers coming over to demand her introduction to help Heath understand that his need for control, because of his past, will ruin his future.

All ends well as Heath and Annabelle eventually come together.

More summaries and resources for teaching or studying Match Me If You Can.

Match Me If You Can from BookRags. (c)2022 BookRags, Inc. All rights reserved.