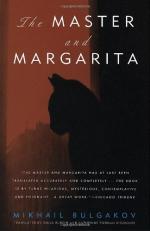 Introduction & Overview of Master and Margarita

Mikhail Bulgakov
This Study Guide consists of approximately 37 pages of chapter summaries, quotes, character analysis, themes, and more - everything you need to sharpen your knowledge of Master and Margarita.

The Master and Margarita by Mikhail Bulgakov is considered one of the best and most highly regarded novels to come out of Russia during the Soviet era. The book weaves together satire and realism, art and religion, history and contemporary social values. It features three story lines. The main story, taking place in Russia of the 1930s, concerns a visit by the devil, referred to as Professor Woland, and four of his assistants during Holy Week; they use black magic to play tricks on those who cross their paths. Another story line features the Master, who has been languishing in an insane asylum, and his love, Margarita, who seeks Woland's help in being reunited with the Master. A third story, which is presented as a novel written by the Master, depicts the crucifixion of Yeshua Ha-Notsri, or Jesus Christ, by Pontius Pilate.

Using the fantastic elements of the story, Bulgakov satirizes the greed and corruption of Stalin's Soviet Union, in which people's actions were controlled as well as their perceptions of reality. In contrast, he uses a realistic style in telling the story of Yeshua. The holy life led by Christ in this book is more ordinary than the miraculous one told in the Scriptures. Because the book derides government bureaucracy and corruption, the manuscript of The Master and Margarita was hidden for over twenty years, until the more lenient Khrushchev government allowed its publication.

More summaries and resources for teaching or studying Master and Margarita.

Master and Margarita from Gale. ©2005-2006 Thomson Gale, a part of the Thomson Corporation. All rights reserved.