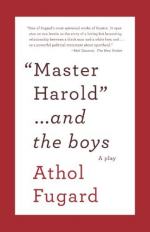 Athol Fugard
This Study Guide consists of approximately 18 pages of chapter summaries, quotes, character analysis, themes, and more - everything you need to sharpen your knowledge of Master Harold and the Boys.

Master Harold and the Boys Summary & Study Guide includes comprehensive information and analysis to help you understand the book. This study guide contains the following sections:

This detailed literature summary also contains Quotes and a Free Quiz on Master Harold and the Boys by Athol Fugard.

"Master Harold" . . . and the Boys is a one-act play by Athol Fugard. In the course of an afternoon, two black men and the teenage son of their employer examine the nature of human relationships and societal pressures in 1950 South Africa, enduring an outburst of hatred that threatens to end their long friendship.

On a rainy, windy afternoon, waiters Sam and Willie are practicing for an upcoming ballroom dance competition in the deserted tea room where they work. Willie is upset that Hilda, his girlfriend and dance partner, has not shown up to practice with him for the past few days. Sam quickly points out that she has stopped coming because Willie beats her. Seventeen-year-old Hally, the son of the tea room owner, arrives from school and eats a bowl of soup. The three men talk. Hally becomes visibly upset when Sam tells him that his mother has called and said that his father is being released from the hospital that day. When he calls his home and gets no answer, Hally is convinced that it is not true.

As the afternoon goes on, Hally gets out his books to do his homework, and he and Sam have a discussion about Men of Magnitude -- men who have been social reformers and had a major impact on history. It is revealed that over the years, Hally has shared his textbooks with Sam, enabling him to educate himself and have meaningful discussions with Hally about a variety of topics. The three men reminisce about life in the boarding house Hally's mother owned before opening the tea room, remembering how Hally spent most of his time in the room Sam and Willy shared and a particularly good day on which Sam made a kite and took Hally out to fly it.

Hally's mother calls and says that his father is indeed being discharged, upsetting him greatly because his father is an alcoholic who makes their home life miserable. Hally speaks briefly with his father, hiding his dismay. When he gets off the phone, he erupts in a bigoted tirade against Sam, demanding that he treat him with deference and begin calling him Master Harold. After Hally spits in his face, Sam reveals that he made a promise to himself to keep Hally from feeling ashamed because of his father and to be a better man, but he has failed. As the situation defuses, Sam expresses the hope that Hally will make better choices in the future and after Hally leaves, Sam and Willie resume their dance practice, choosing beauty and romance over the world's ugliness.

More summaries and resources for teaching or studying Master Harold and the Boys.

Master Harold and the Boys from BookRags. (c)2022 BookRags, Inc. All rights reserved.