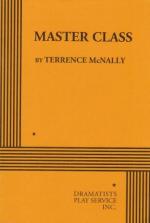 As Master Class begins, the house lights are still up. An accompanist seats himself at a piano, after which Maria enters, wearing expensive clothes. She announces that there is to be no applause, because everyone is there to work. She makes some remarks about music as a discipline and says that the singer must serve the composer. In the first of many anecdotes about her life, she tells how, during World War II, she used to walk to the conservatory and back every day, even though she had no proper shoes.

She calls for the house lights to be turned off, and addresses some remarks to the accompanist, telling him that all performers must have a distinctive appearance. The accompanist becomes the butt of her somewhat cruel humor, and she pays tribute to her own teacher, Elvira de Hidalgo.