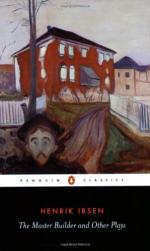 Henrik Ibsen
This Study Guide consists of approximately 58 pages of chapter summaries, quotes, character analysis, themes, and more - everything you need to sharpen your knowledge of The Master Builder.

Kaia comes in to let Solness know she's arrived for work and that Ragnar isn't with her because he's staying with Brovik, who's very ill. She asks whether Solness will want to see Ragnar when he arrives. Solness says he's got nothing to say to him. Kaia leaves.

Solness suggests that Aline should go for a walk. She says that would be a good idea, but stays. They discuss how Hilda's already up and moving about, and Solness comments on how things will be different from now on. Aline thinks he means because of Hilda, but Solness tells her it's because of the new house. Aline tells him that the new house will never be a home for her because...

The Master Builder from Gale. ©2005-2006 Thomson Gale, a part of the Thomson Corporation. All rights reserved.