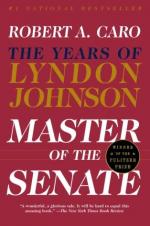 Master of the Senate: The Years of Lyndon Johnson - Part 5 Chapter 39 Summary & Analysis

Having proved he could conceive a broad strategy on a national scale, LBJ had next to work tactically on the volatile battlefield of the Senate floor. He would need to seize the precisely right moment to strike decisively as soon as an opportunity presented itself. LBJ had to recruit liberal Democrats and Republicans.

The "Douglas Group" refused to compromise on Part III, their dream bill. They lacked the master chess player's ability to look several moves ahead to see the value of having the 1957 bill defeated by the Democrats and use that as an issue to win control of the Senate and its committees in 1958. They counted votes and believed they could beat the South on cloture and get everything they wanted.

As the Fourth of July recess approached, Russell asked, for the first time in his Senate career, not to...

Master of the Senate: The Years of Lyndon Johnson from BookRags. (c)2023 BookRags, Inc. All rights reserved.