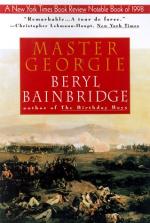 Beryl Bainbridge
This Study Guide consists of approximately 42 pages of chapter summaries, quotes, character analysis, themes, and more - everything you need to sharpen your knowledge of Master Georgie.

This detailed literature summary also contains Topics for Discussion and a Free Quiz on Master Georgie by Beryl Bainbridge.

Master Georgie is the story of George Hardy, an English surgeon and amateur photographer, who leaves his affluent lifestyle in Victorian England to face the perils of war and the battleground at Inkerman in the Crimea. Three people who are close to him tell his story. They are Myrtle, a love struck foundling, Dr. Potter, a geologist and intellectual, and Pompey Jones, a savvy and cynical one-time street performer. This is an historical novel. However, the war-torn Crimea is merely a backdrop for these four main characters, whose lives are forever linked by a single, fateful event that takes place in Liverpool, in 1846. Due to this one, shared experience, their lives are inextricably and permanently woven together.

The book is organized into six chapters, which are referred to as "plates," in reference to the photography conceit running throughout the story. In each chapter, a picture is taken which has thematic implications. Each picture is taken either by the amateur photographer Master Georgie himself, Pompey Jones, or the war photographer. Myrtle, Potter and Jones take turns telling the story in the first person, revealing their relationships with one another, and with the conflicted and enigmatic Master Georgie.

The twelve-year-old orphan, Myrtle, begins the story. As a baby, she is found in a poor neighborhood lying next to a dead woman. By a stroke of luck, she lands in the respectable Hardy household as an adopted daughter. She idolizes and adores her older brother, Master Georgie, and follows him everywhere. He seems to pay little attention to her, though he tolerates her attentions. Her whole life seems to be lived for the purpose of being with him, watching him and pleasing him. One day, she follows him to the Washington Hotel in Liverpool, where he is meeting William Rimmer, a fellow medical student. While waiting in the park, she observes a boy return a stolen duck to a poor woman.

After Master Georgie emerges from the hotel, he walks to a seedy neighborhood with Myrtle following him. Entering a brothel, he discovers the body of his father lying in a whore's bed. The boy in the park, whom Myrtle refers to as the duck-boy, comes into the room just as the body is discovered. It is there that the three begin their remarkable journey together. They manage to get the body back to the Hardy house and up to a bedroom, where the body is "discovered" by a maid later on that evening. Master Georgie instructs Myrtle to pose next to the body, and he takes a picture. He declares at that point that from then on, things will be different between them.

Pompey Jones, the duck-boy, takes over the narration in the next chapter, which begins four years after the death of Mr. Hardy. Myrtle has been sent off to boarding school, where she is becoming a lady. Jones has now become a Hardy family intimate ,and a photography assistant to Master Georgie. By this time, George has also become a full-fledged surgeon.

Jones is contacted by George one day and told to come to the house, as he has a job for him to do. The next morning while everyone is still asleep, Jones appears at the house and engages in some shenanigans by moving a tiger skin rug into the diningroom and placing it on a chair facing the door. He and Master Georgie then leave for Blundell Hall, the home of William Rimmer's uncle. They are planning on meeting Rimmer, and the two surgeons will perform cataract surgery on an ape. The surgery is successful, and a picture is taken. Jones eats dinner with the servants at Blundell Hall and reveals to them that Master Georgie is now married to the former Miss Annie Prescott, who is presently four months' pregnant. A drunken George gets into the carriage, and the two head back to the Hardy home. Jones is resentful that Master Georgie still does not treat him as an equal, as evidenced by meeting a poor man on the road, whom George treats at least as well as he does Jones.

Upon arrival at the house, Dr. Potter, who has by now married Master Georgie's sister, Beatrice, tells George that his wife has had a miscarriage while they were away. He explains that she entered the diningroom looking for her knitting, and was nearly frightened out of her wits after seeing the tiger skin rug propped up on the chair. She fell down, broke her wrist, and had a miscarriage. Pompey Jones is informed at this point that he is banned from the Hardy household. He does not believe that that will be the end of it however, as he is having a homosexual affair with Master Georgie.

Dr. Potter, the objective intellectual and devoted husband of Beatrice, picks up the thread of the story four years later, when he and other members of Hardy household depart the country for the Crimea, which is on the brink of war. By now, he has guessed as to the truth of Mr. Hardy's death. His brother-in-law, George, has decided that he wants to do something morally decent and good with his life, and therefore he will search for a surgeon's post in the Crimea. Potter believes the trip, which includes Myrtle, Beatrice, Annie, and George and Annie's two children, is a terrible idea. An officer on board the ship, a Mr. Naughton, becomes infatuated with Myrtle, at which point George makes up a story about a fictional fiance, in order to put him off. The story spins out of the control to the point where the jealous Naughton attacks an officer and nearly kills him after mistakenly believing he is Myrtle's intended.

After arriving in Constantinople, the news comes that war has been declared on the Russians. George achieves his goal of gaining a post at Scutari. It is decided that Beatrice, Annie and the children will return to England as conditions are deteriorating. A trip to a popular Turkish resort is planned, however, before the women and children leave. There, a photograph is taken of the group. Later that night, at an opera house in Pera, is when Naughton almost commits murder on behalf of Myrtle. Potter seems to be losing his grip on reality as evidenced by his intellectual ravings and fantasies of home and his wife. George, Potter and Myrtle settle in Scutari where George begins regular work at the hospital. The dead and the dying are a commonplace sight, with George constantly attending to gruesomely wounded men. Potter observes Myrtle and George becoming inured to it, as Myrtle seems to be physically blooming, he notes, and George has stopped his drinking. When it seems as though it can't get much worse, cholera strikes and many more die. Potter seems to be losing his grip on reality, admitting that he is losing his bearings and his mind is out of kilter.

The fourth chapter is now told from Myrtle's viewpoint. She and a Mrs. Yardley, who is in the company of a Guardsman, are two of the few women left on the scene as the party departs for Varna. Out riding one day, the two women come across the distressing sight of a young dead soldier, whom they had just seen a short while ago, innocently eating some cherries. Potter, meanwhile, is accosted in his tent by some French soldiers who think his tent is a brothel, further upsetting his tenuous hold on reality, and his preconceived notions about the civility of the French versus that of the English. Myrtle and Georgie's past sexual relationship is revealed. George asks Myrtle to forgive him, telling her he will come to her that night, though he never does. It is because Pompey Jones has entered the story again at a critical moment. He has arrived with an entertainment troupe as a fire-eater and as an assistant to a war photographer. After the show that evening, a picture with the concert troupe is taken. Jones loses no time in insinuating himself into the group, and that night ousts Myrtle for the sexual attentions of Master Georgie.

In a conversation with Jones the next morning, Myrtle learns that the duck incident was a crafty street trick to gain a few coins. Her naivety regarding his intentions, however, still does cause her to reject him outright, as she learns that he keeps the picture of her with the dead Mr. Hardy on his person. It takes the objective Mr. Potter to warn her of his double-minded character. It is also revealed that the real mother of Master Georgie's children is Myrtle, and not Annie, and that both Jones and Potter know this to be true.

Potter narrates the fifth chapter, in which his grip on reality is slipping even further. It is now October, 1854, and the party has been in the Crimea since early March. Conditions continue to worsen. As Potter continues on a downward cycle, both George and Myrtle make references to his poor judgment and mental lapses. Leaving Varna, the group heads toward Inkerman, where a great battle between the Russians on one side, and the English and French on the other, is about to commence. From the ship, bodies are flung overboard, and people are regularly dying of horrific wounds and unchecked cholera. It is learned that Master Georgie's old friend William Rimmer has died of a head wound somewhere on a battlefield. Jones shows up again in the old Punch and Judy van, this time not as a performer but strictly as the war photographer's assistant. He takes a picture of the group during a funeral ceremony, with Potter seeing a vision of Beatrice in the middle of the it. The party trudges on toward Inkerman.

Finally, the survivor Pompey Jones narrates the last chapter, in which he and Potter talk about what it will take to survive the situation they are in. The group is now less than two miles from Inkerman, where the battle is raging. Jones vows that once he gets out of this, he will marry, have children, and that none of his children will ever have to beg, as he did. A wounded twelve-year-old drummer boy arrives at George's hospital tent, and Jones holds a cloth of ether over his face until he dies. He is reminded of the ape back at Blundell Hall. Another soldier with a blown-off ear arrives. His death is unsettling, and it rattles Potter and Myrtle. Jones seems to be inured to what is going on around him. As they descend upon Inkerman, they come face-to-face with the enemy, and Jones is forced to kill, describing the fact that once he's done it a few times, he has become used to it.

Jones makes a sexual overture toward Myrtle, telling her that all he ever wanted, was for her to admit that they were of a kind, and that it was chance and fate that threw them together in Master Georgie's path. Potter is spared a bullet at one point, as if he has a guardian angel. As George is tending to a wounded man, a wounded Russian soldier lifts his musket and fires, killing him. As far as the three reactions to this, Jones is matter-of-fact, Potter is uncomprehending, and Myrtle becomes unhinged.