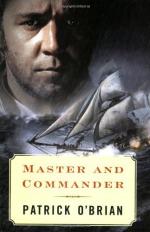 Patrick O'Brian
This Study Guide consists of approximately 61 pages of chapter summaries, quotes, character analysis, themes, and more - everything you need to sharpen your knowledge of Master and Commander.

This detailed literature summary also contains Topics for Discussion and a Free Quiz on Master and Commander by Patrick O'Brian.

This is the story of Captain Jack Aubrey's first command, and the beginning of what has been called one of the greatest literary buddy stories in recent history. Master and Commander is the story of the maturing and tempestuous relationship between a ship's Captain and the ship's surgeon, Dr. Stephen Maturin, two unforgettable characters revealing themselves for the first time in Patrick O'Brian's first book about Captain Jack.

The book itself begins with a small concert in Italy, where the Aubrey, at that moment a lieutenant, meets Stephen, who will become his companion on many voyages. The meeting is not sanguine, because Stephen manages to offend the Jack, who has irritated him by his crude attempts at rhythmical thumping during the concert. It is hard to imagine that these two will become very serious musical partners, Stephen on the cello and Jack on the fiddle, during their long voyages.

This first book encapsulates the highs and lows of Jack's life as a Master and Commander, the lowest rank of Captain in the British Navy. It chronicles the precious moments of his receiving his first promotion as Captain of the Sophie to his brilliant exploits as the most talented prize hunter in Lord Keith's fleet to the humiliation of a court-martial after his ship has been captured by the French. During the entire book, it chronicles his growing friendship and musical partnership with Maturin and develops pieces of Maturin's independent life as a ship surgeon and naturalist.

An important thread in the book is the growing antagonism between Jack and James Dillon, his first lieutenant, equivalent to a first mate on his ship. Dillon is a patriotic British officer but also a member of the United Irishmen, an organization consisting of Irishmen of various diverse classes and political persuasions, which has fallen into disrepute with the Crown. Although a naval hero, Dillon has been cheated of a captaincy, probably owing to his at least former allegiance to this cause. Dillon, having a very straightforward form of patriotism, is not happy with Jack Aubrey's prize-hunting focus and also has taken moments to challenge his decisions and capable leadership in a not so subtle way.

It is an irony of the story that Dr. Stephen Maturin, who has become a close friend and supporter of Jack, has also been a significant part of the United Irishmen's cause. Owing to this affiliation, both of them significantly obscure their membership, but Dillon, at one point, actually compromises his honor by not reporting certain fugitive members of the organization discovered on another ship, when he is threatened with blackmail by one of them.

Despite his antagonism and the possibility of a potential dual (an ever present possibility in the British Navy,) Dillon becomes a strong component in Jack Aubrey's success. Things come to a head between them but the problem is derailed by Dillon's sudden and tragic death. Dillon's demise leaves Jack with the same ambivalence he felt all along for the man, tremendous respect and tremendous concern over his would-be friend's antagonism and contempt.

After Jack's remarkable conquest of the Cacafuego, a prize that has brought him considerable notoriety, Jack suffers a quick and extraordinary defeat at the hands of a French Captain. The subsequent victory of the British fleet frees him but he must face a court martial, a matter of due process for any British officer who surrenders a ship. The court martial ends in a victory for Jack, but not without it taking a toll on his happiness and demeanor.