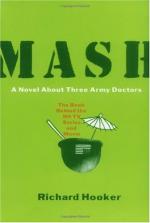 MASH: A Novel about Three Army Doctors was published in 1968 and written by Richard Hooker. It was this novel that inspired both the movie MASH and the much-beloved television show M*A*S*H. The book concerns the activities of the Mobile Army Surgical Hospital 4077th and its staff. The novel mostly concerns the three "Swampmen" doctors "Hawkeye" Pierce, "Duke" Forrest and "Trapper" John McIntyre.

Three excellent surgeons, they are also unusual characters who cope with the boredom and horror of the Korean War by playing pranks and engaging in other wild antics. The book is filled primarily with stories about these characters and their interactions with others, oscillating between humorous and dark stories, making it into one of the most famous contemporary "black comedies."

The book contains fifteen chapters, most of which focus on some event or the introduction of some important character. The book opens with Radar O'Reilly overhearing a conversation between Colonel Henry Blake and General Hammond, with Henry demanding two new surgeons. The army provides him with Duke Forrest and Hawkeye Pierce. Initially they share a tent with a religious surgeon named Major Jonathan Hobson whom they eventually push out of the tent. The two surgeons are excellent and immediately gain their colleagues' respect.

Hobson's replacement is Captain John McIntyre. Initially he is shy and evasive, until Hawkeye recalls that he is famous for having sex with a woman on a train, for which he was nicknamed "Trapper" John. When McIntyre opens up to them, they quickly become close and form an infamous camp location in their tent named "The Swamp" and are thereafter referred to as the Swampmen from time to time.

Various later chapters deal with particular characters. One chapter covers the character Father Mulcahy, also known as Dago Red. The Swampmen are uninterested in religion and very much resent having it pressured onto them. However, Dago Red earns their trust and respect. Captain Waldowski, the Painless Pole, and one of the best American dentists in Korea, decides he wants to commit suicide and the Swampmen talk him out of it.

In other chapters, the Swampmen, and Hawkeye in particular, start to have conflicts with Captain Frank Burns, a wealthy surgeon born with a silver-spoon in his mouth. Frank is not the ablest surgeon and eventually has to be removed from camp, but not until he conspires with Major Margaret "Hot Lips" Houlihan to try to bring down the Swampmen.

Other chapters discuss the Swampmen's attempts to get their Korean assistant, Ho-Jon, into college in the US, Trapper and Hawkeye's attempts to escape camp for various vacations, the deluge of casualties, the temporary replacement of Blake with Colonel Horace DeLong and a football game between the men of the 4077th and General Hammond's men in Seoul. The book starts to end as Duke and Hawkeye's enlistment runs out. Before they leave, they train their replacements and then have a hilarious but somber trip home.