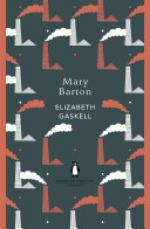 Elizabeth Gaskell
This Study Guide consists of approximately 37 pages of chapter summaries, quotes, character analysis, themes, and more - everything you need to sharpen your knowledge of Mary Barton.

This detailed literature summary also contains Topics for Discussion and a Free Quiz on Mary Barton by Elizabeth Gaskell.

Elizabeth Gaskell is the author of the fiction novel Mary Barton, a tale of Manchester life. It concerns the working class life in Manchester, England, in the late 1830s and early 1840s, when there was a clear contrast between the poor factory workers and the rich factory owners. John Barton walks with his pregnant wife, Mary, who is crying, while his thirteen-year-old daughter, also named Mary, plays in the fields. They meet George Wilson and his wife, Jane. The women sit together so Mrs. Wilson can comfort the elder Mary, and the men discuss Mrs. Barton's sister, Esther, who has left her apartments and disappeared without leaving word of where she was going. Barton laments the differences between the poor and the rich. The group goes to have tea with Alice Wilson, George's sister. The elder Mary Barton dies in childbirth and loses the baby.

Mary Barton gets older and gets a job as a seamstress. She meets a new friend, Margaret Jennings, and her grandfather, Job Legh. There is a fire at Henry Carson's mill, and Jem Wilson rescues his father, George. This puts many men out of work. Mary believes she loves Harry Carson, but Jem Wilson proposes to her. She rejects Jem, but after he leaves, she realizes she does love him. She tells Harry she won't see him anymore. Harry and Jem get in a fight over Mary. John Barton goes to convince the government to help the working class, but it doesn't work. George Wilson dies, and Esther Wilson returns to warn Mary against becoming obsessed with riches and a prostitute like herself. Alice's nephew, Will Wilson, returns from sea. Harry Carson is murdered, and Jem Wilson is blamed for it. Esther finds a piece of paper with Jem's writing near the murder scene, and brings it to Mary. A policeman tricks Mrs. Jane Wilson into testifying the murder weapon is her son's gun.

Mary Barton loves Jem Wilson, and knows she must prove his innocence. She tracks down Will Wilson, who has left to sail on another boat. She succeeds in bringing Will back, who testifies he was walking with Jem Wilson the night of the murder. Jem is freed, but he and Mary have learned that John Barton is the true murderer. Mary returns home and finds her father there. She still loves him, so she takes care of him. John Barton asks Jem and Henry Carson to come to his house one night. He admits to the murder, and Carson eventually forgives him. John Barton dies, and Carson remembers the workers' plight and tries to help out more in the future. Jem and Mary move to Canada with Jem's mother, where they happily raise a family.

More summaries and resources for teaching or studying Mary Barton.