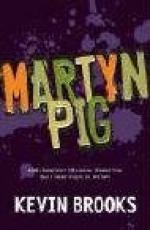 Kevin Brooks (writer)
This Study Guide consists of approximately 40 pages of chapter summaries, quotes, character analysis, themes, and more - everything you need to sharpen your knowledge of Martyn Pig.

Fourteen-year-old Martyn Pig is faced with some difficult choices in the aftermath of his brutal father's accidental death. While he is relieved at being free from Dad's tyranny, Marty also feels a degree of guilt over that relief and conflicting emotions about the the flirtatious and mysterious quality of the girl next door; the blackmailing machinations of her repulsive boyfriend; and the sudden appearance of a large sum of money. As the narrative explores the moral ambiguities associated with both Martyn' situation and his decisions, it also explores issues related to becoming an adult and the allure of freedom.

Martyn begins the first-person narrative of his story with a description of some of the difficulties that he has faced, including having a drunken and violent father; a mother who disappeared from his life early on because of that father; and a name that has triggered series of taunts and endless bullying. He also sets the stage for the story that follows, describing the events that occur within the week before Christmas Day and an important participant in those events - Alex, the girl next door that Martyn has a crush on.

The actual story begins one night a week before Christmas. During a violent confrontation with Martyn, his drunken father accidentally falls and hits his head. Instead of calling the police, Martyn, afraid that he will believed to be responsible for his father's death and sent to prison, leaves the body where it fell. Later that night, when Alex comes by for one of her regular nightly visits, Martyn tells her what happened. Alex tries to convince him to call the police, but he refuses. The next day, Martyn discovers that his father has inherited sixty thousand dollars. He tells Alex, suggesting that if he goes to the police, there will be no way that he can collect any of the money and telling her that now she is as "guilty" as he is. Still convinced Martyn should call the police, Alex leaves, but returns later that day with her slimy boyfriend Dean, who reveals that he knows everything that happened and that he wants the entire sum of money in order to stay quiet. Martyn agrees to have the money for Dean by the following Monday, but concocts a plan to prevent that from actually happening.

After convincing Martyn's nosy Aunty Jean that Dad is still alive, on the Saturday before Christmas, Martyn and Alex manage to dispose of Dad`s body, putting it into a sleeping bag along with bits of hair and cigarette butts left behind by Dean and dumping the whole load into an abandoned quarry. The following Monday, Martyn is visited again by Dean, but tells him that if Dean makes any attempt to tell the police what he knows about what Alex and Martyn, he (Martyn) will tell the police where to find Dad's body and the evidence that Dean was involved in his (Dad's) death. Dean leaves, defeated.

The next day (Christmas Eve), shortly after discovering that Alex has disappeared, Martyn is visited by the police, who tell him that Dean has been killed in a motorcycle accident, and that there's evidence that Martyn was involved in the death. After taking him to the police station to answer some questions and leaving him alone for the night, Martyn is able to think through everything that's happened, and comes to realize that Alex has betrayed him, and has also stolen the money. He manages to convince the police that he is innocent of everything they suspect him of, although the chief detective seems to harbor lingering doubts, at one point asking Martyn what it feels like to have gotten away with murder. Eventually, Martyn is released into the custody of his aunt.

A year later, Martyn writes that he has received a letter from Alex who is now living in America and beginning a career as an actress. On his end, Martyn seems willing to finally move on with his life.

More summaries and resources for teaching or studying Martyn Pig.